How a Savings and Loan Association Makes Money 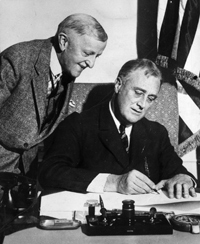 Treasury Secretary William Woodin cheerfully looks on as President Roosevelt signs the 1933 Emergency Banking Bill, one of the steps the federal government took to save the U.S. financial industry during the Great Depression.
Keystone/Hulton Archive/Getty Images

A savings and loan association (S&L) is an institution that lends money to people who want to buy a house, make home improvements or build on their land. Members of an S&L deposit money into savings accounts, and this money is lent out in the form of home mortgage loans. Borrowers pay interest on their home loans, and this interest is passed on to the members and the bank itself.

Originally, the purpose of an S&L was to develop communities. S&L members primarily consisted of local individuals interested in making money through high-yield savings accounts. Their savings accounts were investments in the community. Like any other investment, S&L depositors stood to gain money. And they helped out their neighbors in the process.

The model for this community-minded financial organization goes back to 18th century England, where building societies collected money from members to finance the building of a house for each member [source: Encyclopedia Britannica]. This style of home financing spread to the United States in 1831, when the Oxford Provident Building Association of Philadelphia was founded. Similar financial institutions, then called building and loan associations (B&Ls), popped up in communities across the country. Working with a small number of local investors, B&Ls made money solely by financing mortgages.

The community-minded benevolence of building and loan associations, although generally beneficial to local development, eventually backfired. B&L bankers generally didn't make real estate investments -- that is, home loans -- based on how profitable their ventures would be. Without profits to weather the storm, building and loans were vulnerable to collapse during a weak economy, such as the Great Depression of the 1930s. Many B&Ls failed during this period.

As you can see, S&Ls had a very narrow business focus for a long time -- real estate investment financed through savings accounts. As the 20th century wore on, one weakness of S&Ls became apparent -- vulnerability to rising interest rates.

Next you'll see how such interest rate hikes contributed to the infamous S&L crisis of the 1980s and 1990s.

Traditionally, members of a savings and loan have also had stock in the institution. When the bank profits through business ventures, the members profit. This is different from a commercial bank, in which depositors own no stock in the company.