10 Things You Can Do at an ATM Besides Draw Cash 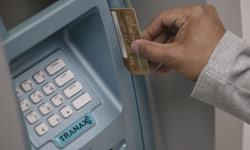 When ATMs entered our daily lives in the '80s, an industry grew around the goal of making banking and living more efficient. Suddenly, it became easy to get money without writing checks or standing in line. It became easier to overdraw that money, too.

According to the ATM Industry Association, people worldwide make 49 billion ATM transactions per year. The most pervasive new use for the machines involves making it easier to deposit money. And some banks are building in tools that allow customers to keep better track of their accounts.

Some experts predict that in a few short years, much of our banking will take place by smart phone. But as long as we use cash, no one is predicting the demise of that easy-money machine. Let's look at some of the latest ways in which businesses and consumers can take advantage of ATMs.

ATMs that dispense gold coins and bars made their debut in recent years in Europe and the Middle East, but now they're available in Florida, too.

According to ATM Marketplace, a company called PMX Gold recently set up a "Gold to Go" machine in the Town Center Mall in Boca Raton. Every 90 seconds, the machine checks the current price of gold and adjusts the exchange rate.

While that's great for folks who embrace the gold standard, it seems that an ATM that stocks bullion is an appealing target for thieves. But Gil Luria, an equities analyst at Wedbush Securities in Los Angeles who tracks the ATM industry, isn't so worried. He says that an ATM is essentially a safe with a computer on it.

"You can take an ATM, you can put it in your pickup, you can use explosives, but it's very hard to get the cash," he says. "If you have the resources to get into an ATM, you'd do better to rob a jewelry store." 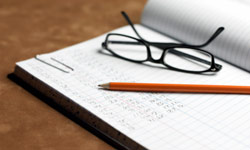 On a budget? Put down the pencil -- now some ATMs can help you track and limit your withdrawals.
Creatas/Thinkstock

Recently, Wells Fargo introduced a button on its ATM interface that allows customers to set a monthly target amount for withdrawals. Each time they take money out, the system will tell them how close they are to that target.

If they exceed the amount, of course, they can still get the money. It's a tracking system, not a punitive system. Customers can see not only how much they've withdrawn in the current month, but they can get a 12-month average, as well. In a press release, bank officials state that Wells Fargo offers this service in the spirit of helping its customers succeed financially.

This new system is probably one of the best known of recent innovations at the ATM. Rather than having to fish for a pen and an envelope, at some banks, you can now stick a check or a stack of bills straight into the machine.

According to ATM Marketplace, top executives for Diebold, a manufacturer of ATMs, credited the company's significant increase in orders in 2010 to the demand for intelligent deposit systems.

While a major advertising campaign by Bank of America has introduced the idea to the public, it appears that the campaigns really sold other banks on the idea. Diebold saw significant orders for the intelligent deposit systems from regional banks as well as major banks. According to ATM Marketplace, Diebold reported net revenue of $46.1 million in the third quarter of 2010. The company saw a $7 million loss during the same period the year before. 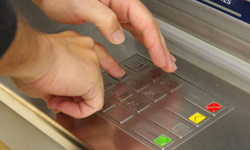 Covering the keypad with your hand when you type in your PIN can help prevent theft.
Hemera/Thinkstock

Since the very first report of a robber sticking up a customer outside an ATM, banks have been working diligently to prevent face-to-face theft. They've added lighting, closed kiosks, security cameras and even security guards to deter the man with the gun looking for an opportunity.

But in recent years, robbers have taken as much as $1 billion in a single year without ever drawing a gun or looking a single customer in the eye. They steal cards and suspend wireless cameras over the PIN pads to capture customers' ID numbers.

As the crimes become more sophisticated, so do the methods of deterring them. One company is offering a system that will make the card slot vibrate to prevent card skimmers from collecting magnetically recorded information.

Some banks and stores are recommending low-tech solutions, as well. They're simply asking their maintenance crews to see if they spot any cameras suspended over the PIN pads when they make their rounds.

One of the most pervasive experiences for consumers at the ATM involves learning about other bank services while waiting for the money. If you have a child, chances are you'll see an ad about the bank's new college fund account.

"You can think of it as a very useful ad, because it's a one-to-one conversation," Luria says. "The bank knows everything about you, and they've got you in front of a screen." Who knows what will come along next. Soon, we may be able to watch TV or check e-mail while we wait for our transactions to be processed. 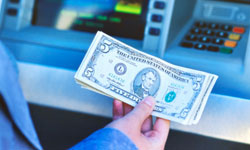 Depositing cash directly into an ATM allows banks to reuse the bills that same day.
Stockbyte/Thinkstock

With the new methods for depositing cash without an envelope, some banks are employing systems to recycle and use that cash the same day.

These systems are leading to lower costs and higher security, and they're particularly popular with banks in Russia and China. For starters, if you can recycle cash from an ATM, you don't have to call for armored truck deliveries quite as often. "If you can take the cash deposit without an envelope, you can use it to disperse cash," Luria says. "That makes banks more efficient."

Though individual state lottery commissions still need to approve the machines, a company in Mississippi has started producing ATMs that will not only dispense lottery tickets, but will also reach into the cardholder's bank account to pay for them. It will randomly choose Quick Pick numbers and text them to the player, as well.

In a press release, the company, Triton Systems, touted the machines' ability to increase revenue while not increasing the time people spend standing in line. 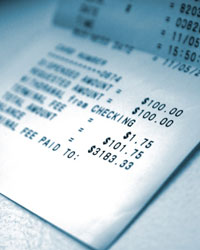 ATM fees are annoying, and unfortunately, they're not going anywhere anytime soon.
iStockphoto/Thinkstock

This issue has become, perhaps, the most controversial aspect of ATM convenience. If you go somewhere other than your bank to get money, you'll have to pay to get it.

However, this central fact of ATMs has become a great marketing device for the banks, as well. "It's one of the ways the big banks tell consumers how lucky they are to be banking with them," Luria says. "If you're with another bank, and you pay Bank of America a $3 fee, then you might decide to go with Bank of America."

Though the issue of regulating ATM fees crops up in legislation from time to time, Luria says that fees have remained stable or even increased in recent years.

2: Pay a Bill for a Relative

With the idea that immigrants to the United States send billions of dollars home every month, Tio Networks recently launched partnerships that would allow people to use kiosks in the United States to pay utility bills for relatives in Latin America.

This is a twist on an old idea to provide convenience -- at $4.95 per transaction -- to a population that needs easy ways to help faraway relatives.

The idea of paying bills at an ATM is nothing new; it's been tried in the United States. Luria says that a few years ago, a company tried a pilot program to allow people to pay utility bills at ATMs set up in 7-Eleven convenience stores. "That never took off in the U.S.," he says. "Maybe consumers had a hard time thinking of 7-Eleven as a place to pay bills."

1: Use a Smart Phone 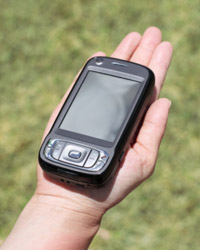 Is the smart phone the new wallet? Before long, it may erradicate the need for an ATM card.
Kazuhiro Tanda/Digital Vision/Getty Images

Eventually, according to Luria, the little card we stick into the ATM will go the way of the cassette tape and the Walkman. The smart phone will become the new wallet. "You'll be able to use a phone at an ATM," he says. "Instead of putting your card in to identify yourself, you wave your phone in front of the ATM."

Virtual banking is already making its way in the business. In Philadelphia, you can already deposit a check by phone -- without going near a machine.

But for those who need to use the actual machine, the time is coming when your accounts, your identity and your preferences will all be packed into your mobile device."I think, in general, it'll help save money," Luria says.

To learn more about ATMs, check out the links on the next page. 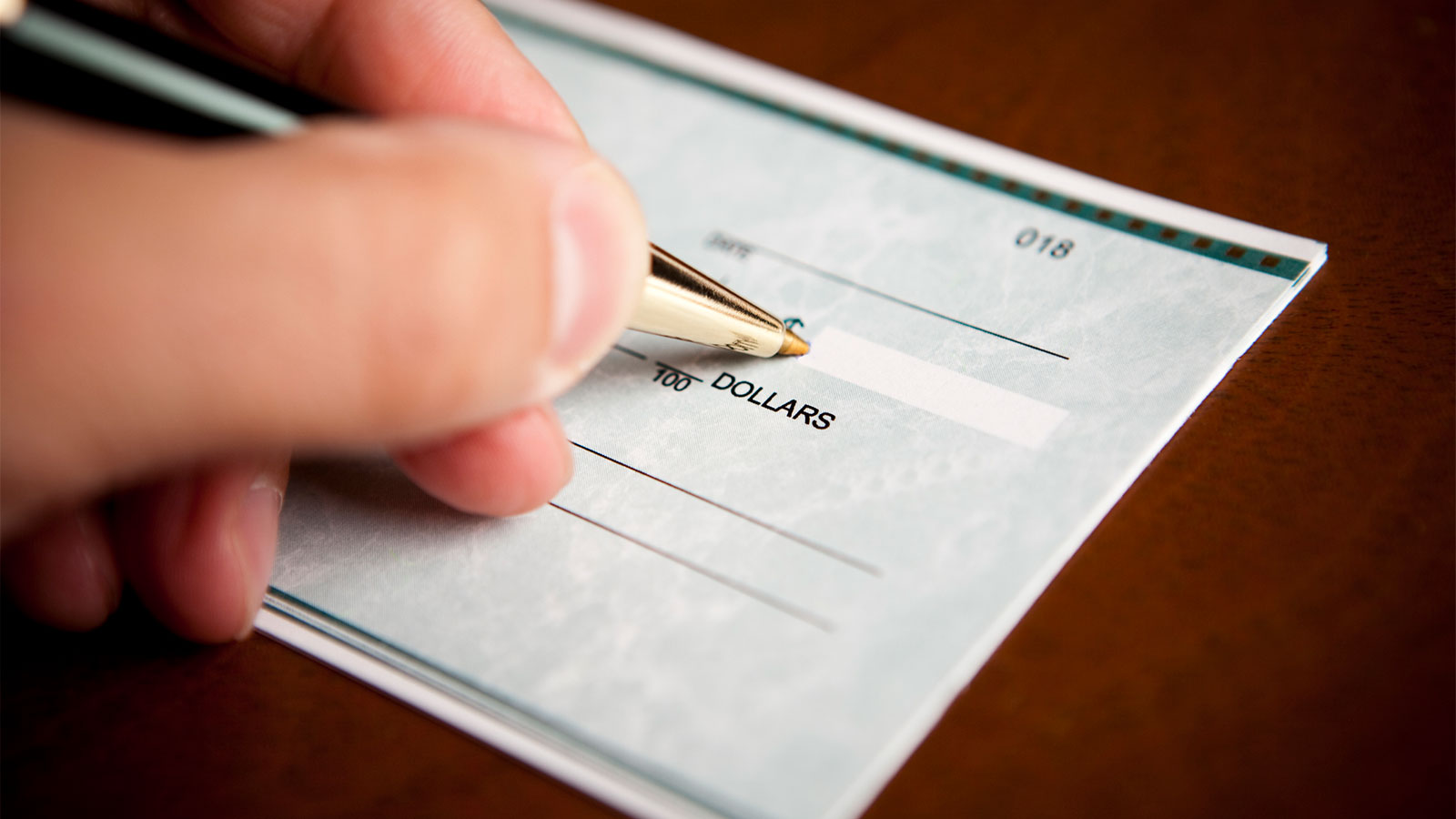