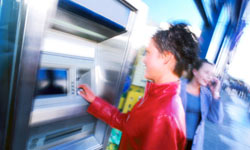 ATM skimming is a profitable crime and netted thieves more than $1 billion in 2008 alone.
Stockbyte/Thinkstock

In James Cameron's sci-fi film "Terminator 2," a young John Connor hooks a fancy piece of gear into an ATM. His high-tech hacking device isolates a PIN number, and soon the ATM is spitting out $300 of someone else's money, a nice pile of cash to fuel an afternoon of teenage delinquency. "Terminator 2" may be science fiction, but ATM skimming is the real deal; in 2010 more than $200,000 was stolen from four Bank of America ATMs in Long Island, New York [source: Schultz].

ATM thieves aren't outfitted with John Connor's strictly-Hollywood gadgetry, but they don't have to be. Using counterfeit card readers and hidden cameras, real ATM skimming is almost as easy as it looks in the movies. To make matters worse, skimming devices are usually well camouflaged and easy to overlook -- but with some help and a little bit of knowledge, you'll hopefully be able to spot a suspicious ATM when you see one.