How does where you live affect your auto insurance rate? 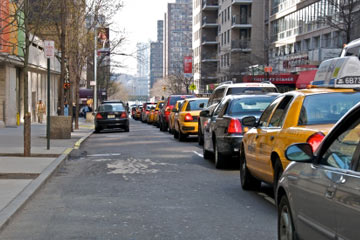 If you live an urban area, you probably pay more for your car insurance than your rural counterparts. See pictures of car safety.
©iStockphoto.com/JayLazarin

Way back in 1891, inventor John William Lambert was trying out his new "horseless carriage" when he crashed into a hitching post. His top speed was only 5 miles per hour (8 kilometers per hour), so injuries were minor. But it's also safe to say that Lambert had no insurance to cover this, the very first auto accident on record [source: Ohio History].

We've come a long way since then. Today, every state requires drivers to carry insurance, and what you pay for insurance over the life of your vehicle can be greater than the cost the car itself. As you probably know, insurance companies base their rates on many factors, including your age, driving record, marital status and the type of car you own. What may come as a surprise, though, is that where you live also has a significant effect on your insurance premium. The reason is simple: Your place of residence influences your likelihood of having an accident, as well as how much the mishap might cost. Higher claims translate into higher premiums.

Insurance companies are likely to ask a series of questions about your particular area to figure out how big a potential risk you'll be [source: Ruuska]:

Insurance companies factor the answers to these questions into the rates they offer you. But it gets even more complicated. Some location-related factors that can bump your premiums are quite surprising. Read on to find out what they are.

Beyond Fender-benders and Break-ins: Other Local Factors That Influence Rates

Insurance companies look at more than just the local conditions that can cause accidents when they're determining your insurance rates. One consideration, for example, is your state's policy about medical benefits. For example, Michigan guarantees unlimited personal injury protection and also requires insurers to pay victims up to three years of lost wages. Consequently, the state's rates are among the highest in the U.S. [source: MSN.com].

The legal climate in your state can affect rates, too. In Louisiana, judges are usually the ones who determine damages for accidents; a jury gets involved only if the amount of the claim is more than $50,000. Since elected judges tend to give higher awards to those injured, the insurance companies shell out more and pass on the cost to customers [source: MSN.com]. Some insurers even vary rates according to how many lawyers per capita there are in your area. More lawyers, more lawsuits.

Some areas, particularly those with high unemployment, have a larger number of uninsured drivers on the road. If one of them crashes into you, your insurance company has to pay. The result: higher premiums for those who do carry insurance.

Competition among insurance companies, on the other hand, can lower your rates. In a state with fewer accidents, like Vermont, more companies vie for your business, creating a buyer's market.

Where you keep your car matters, as well. If you live in a city, you may get a break on your insurance rate if you park your car in a secure garage. Another factor is how far you live from your job or school. A shorter commute can often translate into a lower rate.

All things considered, it's clear that your zip code can have a big influence on your auto insurance rate. But is that fair? Should all drivers in an area be penalized for a high crime rate or congested roads? Some folks have claimed that determining rates that way amounts to racial or economic profiling, and is a form of discrimination. Back in 1988, California voters passed Proposition 103 to keep insurers from penalizing customers for where they live. The law requires companies to set rates based primarily on a person's driving record, driving experience and annual mileage [source: Auto Insurance Tips].

But those who live in most other states still have to contend with premiums that vary by location. And don't think if you move to a higher rate area that you can avoid the boost by not informing your insurance company. The company may refuse to pay a claim if you haven't updated your address.

If John Lambert were alive today, he might be pleased to know that drivers in his home state, Ohio, enjoy some of the lowest insurance rates in the country for their horseless carriages [source: MSN.com]. If you're not so lucky, though, there's only one sure way to avoid paying the rate for your particular area: Sell your car and put on your walking shoes.

All insurance involves a kind of paradox. When I insure my auto, home, health or life, I'm betting I'm going to have a car crash, lose my house to a fire, get sick or be run down by a train. The insurance company's betting I'm not. And the odds are stacked in their favor.

Preparing this article set me to thinking how complicated the issue really is. Somehow, insurance companies and regulators have to find a balance between spreading the risk to everyone and charging more to those who are more likely to file a claim. It raises all kinds of questions. Should I pay more for home insurance if I build in a flood plain? More for car insurance if I'm under 25? More for health insurance if I smoke?

Two things seem clear. One is that there are no easy answers. The other is that whatever your insurance premiums are, you're bound to think they're too high.

Taking Out a Personal Loan? Some Mistakes to Avoid
What is the Internet Tax Freedom Act?
How Flex Funds Work