Browse the article How does the car you buy impact your insurance rate? 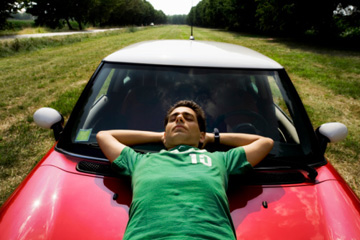 This guy's over the moon about his Mini. Are his insurance rates astronomical, too? See pictures of small cars.
iStockphoto/Thinkstock

My current dream car is a Mini Cooper (OK, my real dream car is probably a 1930s Packard or something along those lines, but let's be realistic). However, I've always driven sensible sorts of cars like four-door sedans and station wagons, and usually, they've been pre-owned.

During my most recent car-shopping expedition, I didn't think about how the kind of car I bought could potentially change my insurance rate. I just assumed that it would go up with a newer car (unless I did go for that classic car, of course), and I knew I wouldn't be getting anything pricey or high-end. I just wanted a safe, reliable vehicle I could afford, and ultimately, my rate didn't go up enough to make a huge dent in my overall budget.

But that's just me. If you have your heart set on a specific car or have the means and desire for a luxury vehicle, you should definitely consider how your insurance rate will affect the overall cost of owning your car.

Lots of things go into figuring out that rate, and car insurance companies employ statisticians called actuaries to do it. Each company has its own proprietary formula -- so it's a bit of a mystery -- but we do know that statistics compiled about the type of car you drive are very important in determining how much you'll pay.

But before you think that your desire for a brand-new, shiny red sports car will guarantee you sky-high insurance rates, consider this -- an older, "boring" car may be expensive to insure, too. Read on to find out why.

Big and New, or Small and Old?

Less flashy cars can be more expensive to insure for a few reasons. According to the National Insurance Crime Bureau, the top three most stolen cars in 2010 in the United States were mid-priced sedans from the early 1990s [source: CNN Money]. A car like the 1995 Honda Civic, for example, is easier to steal (less likely to have a car alarm), and there's a thriving market for the parts. This phenomenon isn't limited to the United States, either. The most stolen car in the United Kingdom in 2011 was the Ford Transit, a panel van that looks good to thieves due to the easy sale of its spare parts and its value as scrap metal.

Older, more reliable cars are also typically the first car for a young driver -- and young drivers get into more accidents than older ones. Cars that appeal to younger drivers could end up costing you almost as much in insurance rates as a sports car because of the accident factor, too. Yes, popularity makes a difference.

But does this all mean that the insurance premiums for somebody driving an oft-stolen older car will be higher than if he bought a brand-new Cadillac Escalade? Probably not. The Escalade remains one of the most-stolen, new model year vehicles. Not only is it a large, expensive luxury vehicle, but it's also high-profile. Luxury cars also cost more to repair and replace if you're driving one and get into an accident -- and even more so if they're loaded with pricey, high-end features.

So an expensive car will probably raise your insurance rate, but so will a fast car. A little two-seater roadster like a Mazda Miata is less expensive than an Escalade. It's also designed specifically for speed, being light, small and easily maneuverable, and there are also lots of ways to upgrade it to make it go even faster. Statistically, you're more likely to speed when you drive a sports car. And get speeding tickets. And drive recklessly. And get into accidents. Yep, that equals higher insurance rates.

For some reason, a lot of people think that red cars mean higher insurance rates. It's probably related to the perception that drivers of red cars tend to get more speeding tickets, but neither is true. While there are many factors that go into determining insurance rates, the color of your car isn't one of them. 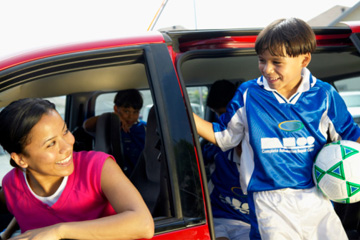 When it comes to insurance rates, soccer moms have the last laugh.
Barry Austin Photography/Lifesize/Thinkstock

It's not just about the specific make and model of the car, either; what's under the hood may be driving up your insurance rate. Let's go back to my beloved Mini Cooper. If I wanted to buy a new hardtop Cooper, I'd have different trim levels (or option packages) that range from a 121-horsepower to a turbocharged, 208-horsepower engine.

A bigger, more powerful engine means that you're more likely to test it out by driving fast ... and you know the drill. That includes customizing cars to increase their performance, too -- if you buy a souped-up Honda Civic, it'll cost more to insure than a standard version of the same model.

Size does make a difference. A huge SUV won't move as fast as a little sports car, but if you hit someone in it, it's going to do more damage. On the other hand, some people may sneer at mini-vans, but they tend to have lower insurance rates because of the stereotypes surrounding who drives them (I'm talking to you, soccer moms). They also get good safety ratings overall. Actuaries look at crash test ratings, so if your car didn't do too well for its model year, that's going to translate to a higher rate. While newer cars can be more expensive just based on their retail value, an older car may be lacking safety features like side-impact air bags. Yet another tricky dichotomy to consider!

Since insurance companies don't reveal exactly how they calculate rates, what can you do? Your research. Find out if your dream car is also highly desired by thieves and investigate its crash test safety ratings. If you're thinking about buying (or leasing, which can be more expensive because the company leasing it to you dictates the coverage, not you), you can run potential cars by your insurance company to get a quote. That way you won't get a shock after you buy the car!