Browse the article 5 Tips for Buying Car Insurance for Teenagers 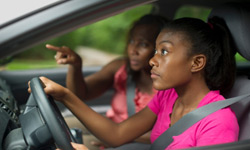 Take (some of) the terror out of letting your teenager behind the wheel and figure out how to cover them in case of an accident. See car safety pictures.
Gary S. Chapman/Getty Images

No two words can fill parents with more unutterable dread than "teenage drivers." If your kids are approaching driving age, you may be wondering how to minimize the costs of insurance, or even whether you should add your teen to your insurance policy at all. It's a tough choice to make: After all, insurance policies that include teen drivers can add more than $1,000 per year to your premiums.

Why is it so expensive to insure teen drivers? Insurance companies calculate premiums based on the risk of an accident. After all, the greater the risk, the greater the chance they'll have to pay on a driver's claim. And who are the riskiest drivers in the world? Teens. According to the Centers for Disease Control (CDC), drivers between the ages of 16 and 19 are four times more likely to crash than drivers of other ages. Even though teens only make up about 14 percent of all the drivers on U.S. roads, they account for nearly 30 percent of auto-related injuries, calculated by cost [source: CDC].

That raises the stakes for insurance companies -- and becomes a matter of life and death for teens and parents. In the U.S., 3,000 teens were killed in car accidents in 2009 -- in fact, it's the leading cause of death among teens [source: CDC]. Teenage boys account for even higher risk rates. It's possible to reduce your insurance rates and increase safety for your teen but it requires examining some of the reasons teens are such risky drivers and working to minimize them. These primarily include inexperience and inability to recognize hazardous situations, reckless and aggressive behavior, distractions from friends in the vehicle -- and, of course, drunk driving.

The five tips in this article will not only help you save money on your auto insurance; they will help make your teen a safer driver.

Do Well in School

There are a lot of reasons to do well in school, but you probably didn't realize that good attendance and a high grade-point average can net a discount on car insurance for drivers in high school or college. While it varies from one insurance provider to the next, you might be eligible (or be able to negotiate) a five to 10 percent discount for teens who maintain a B average, or a 3.0 grade point average on a 4.0 scale [source: Kroll].

There are other educational ways to trim the insurance cost as well. Taking a drivers' education course or safe driving class can knock as much as 15 percent off the insurance bill.

If a teen driver will be attending college away from home and not using the family car, most insurance companies will let you take him or her off the insurance plan until the end of the semester. There might be a distance requirement, typically 100 miles (161 kilometers). If the college is closer, the insurance provider might not allow it, which seems odd – is a teen going to school 80 miles (128.75 kilometers) from home really going to be jaunting around in the family minivan on a daily basis? 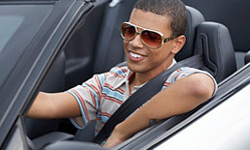 A smart and safe driver is the coolest driver there is.
Jenny Acheson/Getty Images

There's one sure-fire way to make your insurance cost more: Get in an accident. For a teen driver, the best way to keep those rates low is to be a good, attentive and safe driver. Anything that results in a claim on your insurance is going to drive up the premiums, erase any "good customer" discounts and cost you a lot of money in the long run. We're not just talking about serious accidents, either (which, obviously, are to be avoided). Any fender-bender or parking lot bump will increase insurance rates.

Don't think you're in the clear just because you didn't cause the accident, either. Speeding tickets, getting busted for rolling a stop sign, reckless driving and other moving violations will impact your driving record and leave you with points that represent an increase in insurance rates. Get caught driving drunk and the penalties are even worse, including fines and possible revocation of your driver's license.

Get a Safe Used Car

This doesn't mean that you should buy a cheap old clunker for your teen. Insurance companies discount premiums for modern safety features like anti-lock brakes, airbags and stability control. The ideal car is three or four years old and in good working order, with as many safety features as possible. In the U.S., you can check national crash test data to find which cars have the highest safety ratings.

It's not just a matter of safety, though. If a car is a thief magnet, it will cost more to insure. Find out which cars are most likely to be stolen at the National Insurance Crime Bureau.

This also brings up one of the rare cases when it might be cheaper for a teen to purchase his or her own insurance, separate from the parents' insurance. If both parents drive flashy, high-performance cars and the teen will be driving a different car, a separate policy may be less expensive.

The deductible is the amount you'll have to pay out of pocket in the event of a claim. Once you've met the deductible, the insurance company takes care of the rest. Why on Earth would you want a high deductible? The higher your deductible, the lower your premium will be.

Basically, when you crank your deductible up to $1,000, you're taking a calculated risk. You're banking on the chance that your teen won't get into an accident. If he or she does, a minor accident will be under your deductible, so you won't bother claiming it. A really bad accident will result in such enormous damages that the $1,000 will seem like chump change compared to what the insurance company covers. So raise that deductible, have some very serious talks with your teen about driver safety, and keep your fingers crossed.

One of the easiest ways to save money on your auto insurance is to compare prices. Don't be satisfied with a single quote from the family's usual insurance agent. Different companies can be hundreds of dollars apart on their premiums.

Consider Not Insuring at All

A common question parents have about teen insurance is, "Do I need to bother insuring my teen at all?" We can't really answer that: This article isn't intended to provide specific legal advice. You should make sure you understand your state laws and insurance company's policies before you make any decisions in this regard.

But you're looking for a straight answer, so here it is:

If your teen won't be driving the family car at all, or very rarely, then you can probably get by without insuring the teen. If your teen does get into an accident while not insured, the incident should be covered by the parents' insurance, just as if a friend had borrowed the car. It's unlikely the insurance company would flat out refuse to pay the claim. However, they might make you pay the retroactive premiums since the time that the teen first got his or her license.

There's an important exception to this: If your teen already has a driver's license and has been driving when your insurance policy comes up for renewal and you don't inform the insurance company, they may have a right to refuse future claims if your teen wrecks the car. There's clause that says, in essence, "I didn't lie about any of the stuff that determines how much of a premium you're going to charge me when we signed this policy." Not mentioning a teen driver could be considered a violation of that clause and grounds for the insurance company to refuse the claim. That could cost you a lot of money, so you're much better off insuring your teen.

In case that wasn't enough emphasis, here's a scenario: Your teen rear-ends a Lexus. One with a $50,000 sticker price. Let's be conservative and say the accident does $8,000 in damage to the Lexus. The insurance company refuses the claim because your kid wasn't on your insurance. It doesn't matter what your deductible is: Have fun paying that $8,000 out of pocket. And we haven't even talked about fixing your own car yet. So, be upfront with your insurance carrier.