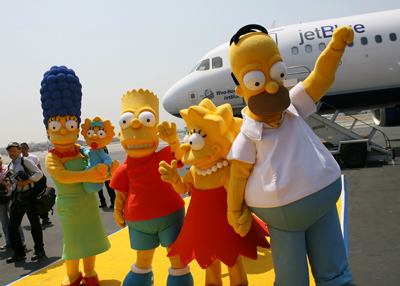 Many U.S. cartoon shows such as The Simpsons, shown here at their big-screen debut, are finished by overseas animators.
Michael Buckner/Getty Images

If you or your children watch cartoons, you're likely benefiting from outsourcing. An industry group recently estimated the worldwide animation production market is between $50 billion and $70 billion [source: rediff.com].

Many entertainment companies, from Disney to MTV to Cartoon Network to Warner Bros., outsource many of their animated features to studios offshore. Shows like "The Simpsons" and "Futurama," along with feature-length animated movie releases may have been conceived in the United States, but brought to life overseas.

This isn't a new trend. It started decades ago when Hollywood studios began sending pre-production work to lower-priced overseas studios, where the work was polished and completed. India, South Korea and the Philippines were often destinations for this work.

Studios in these and other countries perform all kinds of animation work, including traditional hand-drawn cel, 2-D, 3-D, special effects, modeling, caricatures, medical animation and the recently popular CG format. The extended boom has spawned hundreds of animation companies employing thousands of artists, animators and technicians using state-of-the-art equipment and techniques such as SGI, SFX and other motion-capture software and facilities.

India has been a consistent leader in U.S. animation outsourcing. In 2004, the National Association of Software and Services Companies estimated the country's total animation production sector's revenues at about $250 million.

Its population boasts a large number of English-speaking workers, which is an important advantage when working with English-speaking animated characters. It also helps prevent language barrier issues. The country also has a large domestic animation market, so it has a high number of top-notch studios coupled with a large pool of talented but reasonably priced technicians and engineers.

At one point, a $100 million full-length animated film made in America could be made in India for about $20 million.

Some overseas studios that once relied on their pricing to gain a toehold in the U.S. animation market are now instead pitching top quality work as their main selling point. An October 2007 article in Variety told how a studio called Rough Draft Korea is thriving by "consistently producing the highest-quality animation and on schedule."

Still, price remains an important point. Some industry watchers think China will become a strong player in the animation business through its large labor pool and high number of artists.

Besides outsourcing animation services, many companies also outsource their information technology functions. Learn more about IT outsourcing on the next page.