The Economics of Outsourcing 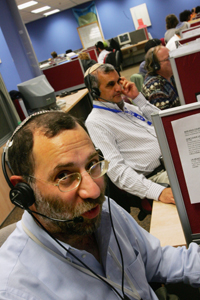 ­For large call-centers such as this one in Israel, it's often more cost-effective for companies to outsource.
© David Silverman/Getty Images

As with most business trends, outsourcing has its roots in simple economics.

Take the case of the fictitious Smith & Co. Manufacturing we discussed earlier. For the company to hire a new line of engineers and equip them it would spend considerable resources planning the venture.

Companies would have to address those questions before hiring, training, housing and equipping the engineers. And once hired, the engineers must be paid. Benefits like medical insurance and retirement contributions typically cost another 30 percent to 40 percent of an individual's salary. If the venture collapses under its own weight, the company's unemployment insurance also will take a hit.

Putting all this together takes time, and time, as the old saying goes, is money. Using this approach, Smith & Co. would have to be well assured that such a massive investment would pay off steadily over many years to justify it. In many cases, companies would rather be less adventurous with their capital.

On the other hand, if Smith & Co. can find an existing engineering firm with the precise expertise their new product requires, they can save time, money, risk and resources. The new product can launch faster and cheaper, meaning more profits for the company and its shareholders.

Smith & Co. is one example of how outsourcing can impact a company and its workers favorably. The practice is criticized, however, when existing company employees lose their jobs when companies choose instead to outsource them. Outsourcing jobs to companies located overseas is typically singled out for particular condemnation, pitting workers against companies and prompting political debate over regulation of such ventures.

Some critics have said outsourcing overseas results in Americans losing their jobs. There are plenty of examples, however, of overseas outsourcing saving domestic jobs, as well. A BusinessWeek article from January 2006 detailed a Midwest printing and packaging company that partnered with an India-based engineering firm in a bid to increase efficiency and its competitiveness and keep the production facility in the United States.

According to The Heritage Foundation, a conservative think tank, the most dire predictions estimate that 3.3 million service jobs will become outsourced to a foreign country by 2015. However, over the past decade Americans lost 7.71 million jobs each quarter. Outsourcing, therefore, amounts to a tiny fraction of jobs lost in the United States. The group also reported that studies show countries with policies that encourage economic freedom strongly correlate with high per-capita production, and the very nature of outsourcing -- getting more production output from lower production input -- leads to a higher standard of living and more economic growth.

So, when does it make sense to outsource locally versus overseas. Turn to the next page to find out.