McDonald's Golden Arches: The Logo Seen Around the World 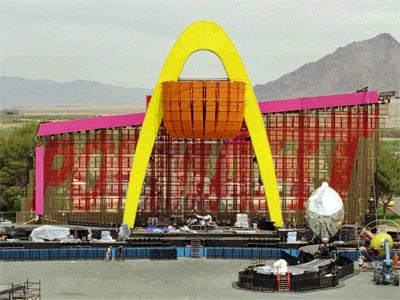 Admit it. That lonely golden arch set up for U2's 1997 stop in Las Vegas during its PopMart tour looks weird without the second arch McDonald's has gotten us used to.
AP Photo/Lennox McLendon

While the Golden Arches may not have much to do with french fries, you'll certainly find them in France (and pretty much everywhere else). With more than 31,000 locations spanning the globe, the Golden Arches have become, like the Nike swoosh and the iconic Coca-Cola script, an instantly recognizable symbol of American culture throughout the world.

Although the logo remains largely unchanged wherever you go, you can find slight variants from place to place. For instance, the arches outside the McDonald's in Salzburg, Austria, are surrounded by ornate wrought iron metalwork. New York's Times Square hosts Golden Arches emblazoned with bright lights and neon, and the Golden Arches in Canada have small maple leaves placed on their centers. For the most part, however, the Golden Arches in Brazil are the same as the ones in China.

And because the Golden Arches are so easily recognizable, they've even found their way into popular culture. For instance, the band U2 incorporated an enormous 100-foot (30-meter) tall yellow arch into the stage design for its PopMart tour, though, of course, band members insist its resemblance to McDonald's Golden Arches was purely coincidental. Sure it was, Bono. The popular cartoon "Family Guy" references the logo as well, depicting Ronald McDonald as a scary clown tormenting one of the show's characters with the Golden Arches. New York Times editorialist Thomas Friedman even named a political theory, The Golden Arches Theory of Conflict Prevention, after the logo. Not bad for a big, golden "M."

What About the Fry Kids?

If the Golden Arches weren't patterned after giant french fries, then maybe the Fry Kids were. Looking like colorful mops on legs, the Fry Kids were french fry stealing characters in the McDonaldland world. Other characters, like Mayor McCheese, were clearly made out of food, so it's not too far-fetched to think the Fry Kids were, too. Of course, the fact that they go around stealing and eating other people's french fries raises some interesting moral questions, but perhaps it's best not to overanalyze a land where talking hamburgers grow on plants and volcanoes erupt milkshakes.