How do People Become Homeless? 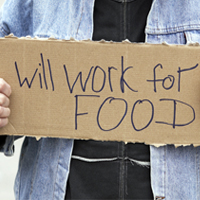 It’s hard to imagine how someone can go from having a home one day to being out on the street the next. Many homeless people start out with jobs and stable residences, but then social and economic factors intervene, causing a rapid change in their living situation.

The two biggest factors driving homelessness are poverty and the lack of affordable housing. In 2004, 37 million people, or 12.7 percent of the American population was living in poverty, according to the National Coalition for the Homeless. Many of these people live from paycheck to paycheck with nothing saved in the bank. The loss of a job, an illness, or another catastrophic event can quickly lead to missed rent or mortgage payments and ultimately, to eviction or foreclosure.

Losing a job happens much more readily today than it did a few decades ago, when most people worked for the same company until retirement. The decline in manufacturing jobs, outsourcing of jobs to other countries, and an increase in temporary and part-time employment has nicked away at the foundations of what was once a more stable job market.

Jobs today are not only far less secure than they were in the past, but many also pay less when considering the rate of inflation. In the late 1960s, a minimum-wage job could sustain a family of three above the poverty line. That isn’t the case today. In May 2007, Congress passed the first minimum wage increase in nearly a decade, from $5.15 to $7.25 an hour (by 2009). Say someone works 40 hours per week every week for the entire year at $7.25 per hour. That person will earn $15,080 per year— an income well below the $17,170 needed for a family of three to reach the poverty line. It’s certainly not enough to afford even the smallest apartment in one of America’s biggest cities. For example, consider New York— a recent report finds that an average one-room studio apartment costs $2,000 a month, or $24,000 a year. So, someone making minimum wage, working 40 hours every week— taking no vacation or sick time— misses the mark by almost $9,000! Although an estimated 15 percent of homeless people do have jobs, they simply don’t earn enough to afford housing.

To meet the federal definition for affordable housing, rent for a one- or two-bedroom apartment must not cost more than 30 percent of a person’s income. Yet in every state, more than the minimum wage is required to afford an apartment by these criteria, according to a report by the U.S. Conference of Mayors. The U.S. Department of Housing and Urban Development (HUD) estimates that 5 million U.S. households either pay more than half of their income in rent, or live in severely substandard housing.

Although the government offers some low-income housing, the numbers of reasonably priced dwellings have been dwindling over the years. Government support for low-income housing fell by half between 1980 and 2003, according to the National Coalition for the Homeless. In the same period of time, more than 2 million low-rent units vanished from the market, either demolished or converted into higher-rent apartments. One million single room occupancy (SRO) housing units also vanished from the market. These units often are used to house people with mental illness or substance abuse problems. People today can wait an average of three years for housing vouchers. Often, they wait in shelters or on the streets.

David Pirtle grew up in a middle-class family in Champaign, Illinois. He graduated from Parkland College, moved to Phoenix, Arizona, and worked as a restaurant manager for 15 years. But then, everything changed. David developed schizophrenia, a brain disorder that can cause people to see hallucinations and hear voices. Once he began showing symptoms of his illness, David lost his job, and then his home. He began hitchhiking his way across the country, eventually ending up in Washington, D.C.

For nearly two years, David slept on steam grates, park benches—wherever he could avoid getting picked up by the police. He was assaulted five times, mostly by teenagers. They threw rocks at him, beat him with a bat, urinated on him, and even covered him with spray paint— just for living on the street.

Eventually David was caught shoplifting, and his probation officer told him that if he was to avoid jail time, he had to take medication for his schizophrenia and stay in a shelter. Today, David works with the non-profit agency Until We’re Home , which fights for the rights of homeless people in Washington, D.C.