Who are the Homeless? 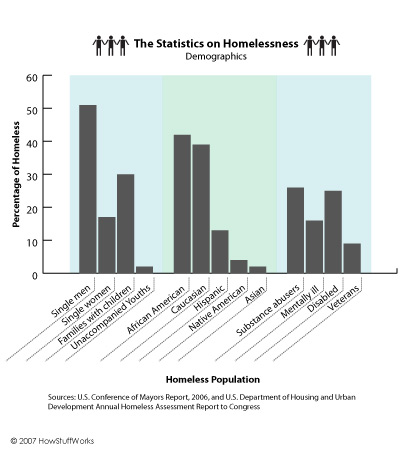 It’s difficult to pinpoint with any accuracy just how many people are homeless in this country because of the transient nature of the population. On any given day, the numbers of people in shelters or on the streets can shift, sometimes radically, as people move from place to place or find more permanent housing. Also, some homeless people live in non-traditional places, such as cars or camp grounds, where they are not easily found.

When agencies gather statistics about homelessness, they use a couple of different methods. They can look at the number of people who are homeless on a given day or during a particular week (called point-in-time counts), although this calculation gives only a quick snapshot of the overall homeless situation. A more accurate method is to look at the number of homeless people over a period of time (a year, for example).

The best and most current estimate, which comes from the Urban Institute and the National Survey of Homeless Assistance Providers and Clients (NSHAPC), puts the number of homeless somewhere between 2.3 million and 3.5 million people each year. This figure roughly translates to1 percent of the American population. Just under a quarter of these people are chronically homeless, meaning that they are repeatedly or continuously without a home.

Minority groups are disproportionately represented among the nation’s homeless. Although they make up only about 12 percent of the population, African-Americans account for almost half of all homeless people. Hispanic people account for another 13 percent of the homeless.

Homelessness tends to be centered in big cities, where housing costs are high, but small towns are not immune. In rural areas, families with children make up a bigger proportion of the homeless than in the cities.