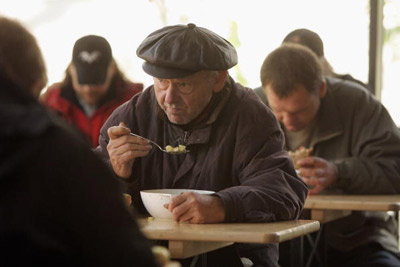 Freegans might seem like a fairly radical bunch, but the idea of scavenging for food is really nothing new. Gleaning (collecting abandoned food from fields or other sources) has been around since ancient times. It's even mentioned in the Bible as a form of charity: Farmers would harvest their crops and allow the poor to collect the leftovers.

Most modern field gleaners collect food passed over by mechanical harvesting equipment or food that is not marketable because of minor imperfections. Large gleaning organizations like the Society of St. Andrew donate millions of pounds of food to the poor and homeless and attract tens of thousands of volunteers.

The United States Department of Agriculture promotes food recovery as a way to get fresh, healthy food to America's hungry. In addition to field gleaning, organizations salvage perishable food from wholesale and retail stores, nonperishable items from food drives and prepared food from restaurants and dining halls. Less wasted food also means less money spent on disposal: Trashing excess food costs the nation $1 billion per year [source: EPA]. If someone gets sick from donated food and it's not a case of gross negligence, the Bill Emerson Good Samaritan Food Donation Act protects charitable individuals and businesses.

Although freeganism likely has roots in the hobo subculture of the Great Depression, it's also a product of the antiglobalization movements that began in the 1960s. One charitable antiglobalization and antiwar movement, Food Not Bombs, began recovering food in 1980 to provide free vegetarian meals for the hungry.

It's not too surprising that people would eventually make the leap from charitable gleaning to foraging as a way of personal subsistence. Freeganism has spread around the world -- Dumpster divers forage in England, Sweden, Brazil and South Korea. Most freegans, however, try to retain some semblance of charity and generosity. They usually forage in groups but resist the urge to hoard every attractive find. They sometimes eat community dinners -- ­potlucks made from scavenged food. As long as there is edible food and usable products in the trash, people will be there to pick up the waste.

For more information on freegans, check out the links below.