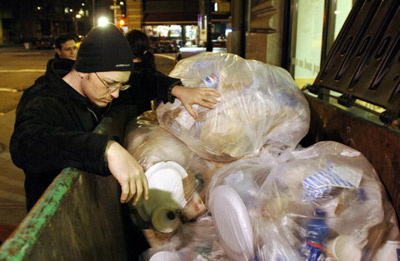 A freegan participates in some urban foraging in Greenwich Village.
Stan Honda/AFP/Getty Images

Most freegans live in cities where trash is high quality and plentiful. New York City, with its density and wealth, is practically the capital of freeganism. Because freegans tend to concentrate in urban areas, most practice urban foraging. Freegans look for furniture or bags of clothing on curbsides, electronics in office Dumpsters and food behind grocery stores and restaurants.

Dedicated freegans usually establish a routine -- a set of Dumpsters they visit weekly or even daily. Many learn when trash goes out and when Dumpsters are unattended. Although it's always illegal to venture behind a fenced-off area marked "no trespassing," laws on Dumpster diving vary considerably. Oddly enough, a 1988 ruling by the Supreme Court, California v. Greenwood, gave tacit approval to Dumpster divers. Although the ruling originally justified the police's search of a suspected narcotics trafficker's trash, freegans use it as an excuse to scavenge food and other cast-off items. Cities with anti-scavenging laws, however, can still fine Dumpster divers.

Many stores also discourage freegans. They're usually afraid of lawsuits from divers who get sick from discarded food. Stores that donate their excess food claim they leave nothing palatable in the trash. Freegans disagree. Stores throw out large amounts of aesthetically damaged goods like bruised fruit or crushed boxes. They also discard products that have reached their sell-by date. Although sell-by dates provide a general idea of when food will go bad, they are not safety dates. Trash from grocery stores and restaurants is also different from that of the average residential "herbie curbie." Stores usually bag discarded food separately from other trash.

S­ome freegans engage in wild foraging to collect edible plants in woods or parks. Freegan.info hosts guided foraging trips to identify plants that are safe to eat. Freegans also grow their own food. Some create plots on their own property; others practice guerrilla gardening and convert abandoned lots into community gardens. And since freegans understandably do not like to throw things out, many engage in free sharing -- trading at markets where no money changes hands.

Freegans usually have unconventional health care because they work unconventional jobs -- if they work at all. Many refuse to support large pharmaceutical companies and HMOs. As an alternative, some freegans join health care collectives or practice holistic medicine with acupuncture, spinal adjustment, exercise and herbs.

There's more to life, however, than basic Dumpster diving. In the next section, we'll learn about other forms of food recovery.

How safe is it to eat food out of a Dumpster? Many freegans claim they've never gotten sick from properly cleaned and cooked scavenged food. Bacterial contamination, however, the cause of most food-borne illnesses, can happen at any point: at harvest, during shipping or -- surprise -- while sitting in a Dumpster. Bacteria multiply most rapidly in the danger zone between 40 and 140 degrees Fahrenheit.