by Dave Roos Jan 11, 2016
Google software engineers work in a room with a view and an unused foosball table at their Kirkland, Washington office. Other Google amenities include a gym, soda fountain and rock climbing wall. Stephen Brashear/Getty Images

Call it the “Google effect.” For six straight years, the Silicon Valley search giant has snagged the top spot in Fortune's annual ranking of the 100 Best Companies to Work For. The perks of working at Google's flagship campus in Mountain View, California, are legendary: unlimited gourmet meals and healthy snacks, on-site gym and climbing wall, music and art studios, free shuttle service, and of course the infamous nap pods.

Prodded by Google's wild success, lots of other companies are following the leader, offering flashy nonmonetary perks to woo and retain employees. Surprisingly, some are located far outside the highly competitive confines of the California tech industry, like the Power Home Remodeling Group in Chester, Pennsylvania, which recently flew all 1,550 employees and their spouses to Cancún — including a private concert by Snoop Dogg — and is installing a “living wall” at its headquarters.

While staff retreats to tropical resorts are still rare, it's much more common for American workplaces to now include gaming areas, foosball tables, free snacks and even the occasional nap room. (Leading nap pod manufacturer Metronaps claims to have sold its $8,000 to $13,000 units to dozens of companies from Facebook to Proctor & Gamble, plus university libraries, fitness centers and NASA.)

But the question is, does the average American worker actually use the Xbox One in the company gaming den, or is he too busy for that? Does she want to edit a spreadsheet sitting in a purple beanbag chair? Are employees really clamoring for ping pong tables and more “nap time” at work (assuming they believe the boss won't give them the stink eye for using them), or are these perks that miss the point of what makes a workplace productive and healthy?

Gerry Ledford is a senior research scientist at the Center for Effective Organizations at the University of Southern California Marshall School of Business. He believes that the over-the-top benefits spreading from Silicon Valley across the country are the product of a singularly competitive and rich industry.

“The tech industry is the most competitive labor market in the country. There's a huge shortage of programmers,” Ledford says. “Luckily, tech companies have lots of money to throw at the problem. They already pay a lot. They already have great normal benefits. So they're asking, what else can we do to get one more coder to show up?”

"You can be contented as a cow and not very productive, or absolutely miserable and highly productive.”
Gerry Ledford, Senior Research Scientist, Center for Effective Organizations

While on-site laundry services, free meals and napping rooms night make sense in a 24-7 work culture like Silicon Valley, adds Ledford, the same conditions do not apply to an insurance company in South Carolina or a manufacturer in Ohio. Not only do these companies simply not have the cash to throw at lavish perks, but there's not a guaranteed payoff that a “fun” workplace results in increased productivity.

“Is a happy worker a productive worker?” asks Ledford. “This has been the subject of academic research forever, and the answer is, ‘not necessarily.' You can be contented as a cow and not very productive, or absolutely miserable and highly productive.”

It's quite possible to have the opposite problem of employees being too busy to use the game room or rooftop garden the company so lovingly installed. These could also become too popular so everyone is perpetually taking a break and not getting any work done. So what's a CEO to do? What are the perks that really could contribute to the bottom line?

Lindsay McGregor and Neel Doshi co-wrote "Primed to Perform: How to Build the Highest Performing Cultures through the Science of Total Motivation." "The irony of some of the more opulent office perks is that they're unrelated to the kind of work that needs to get done in the office in the first place. In the worst cases, they can mask or even contribute to a toxic work culture," they write in an article for Fast Company. The authors advise CEOs to ditch the foosball table and invest in tools and knowledge that workers can actually use:

“Some employers assume that what their employees wanted years ago is what they still want,” says Kathleen Downs, recruiting manager at Robert Half International, the largest U.S. specialized staffing firm. “But these things are fluid and managers need to be attuned to that.”

She encourages CFOs — her specialty is finance and accounting jobs — to regularly survey workers to find out which perks their employees value the most. This past December, Robert Half conducted a survey that highlighted the disconnect between CFOs and workers when it comes to nonmonetary perks. The CFOs surveyed believed that health and wellness benefits like free gym memberships were most important to employees, while workers were actually much more excited about flexible work hours and telecommuting.

“Health and wellness is important to younger workers, but not in the way that most executives think,” says Downs. “They want to be able to work out in the morning and stay a little later at the office. The flexibility is more important than the gym membership.”

If you want to know the real secret to Google's success, though, you have to ask a Googler. Scott Larson worked as a senior software engineer in Google's Pittsburgh office from 2006 to 2012. When he first got there, Larson says, “the pool table was used nearly all day, every day, and it was magic.”

If someone had a work puzzle to figure out, they would head straight for the pool table, which had a white board on wheels for keeping score. As more players joined, ideas ricocheted around the table, and innovative solutions were scribbled on the whiteboard.

Over time, though, use of the pool table diminished but not the camaraderie. “The culture itself is the real perk,” Larson says, not the pool table. “And honestly, my favorite perk working at Google was the people that I got to work with every day, by far.”

Now That’s Cool
Sometimes employees need an excuse to let loose. Blue Soda Promotions, a product promotions firm outside Chicago, has its entire staff take a “screen break” from 3:30 to 4 to fight fatigue. Choices include a mini bowling alley, game tables and a “serenity room.”

Hand Sniffing After Hand Shaking Is a Thing 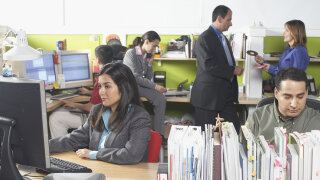 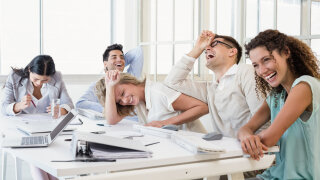 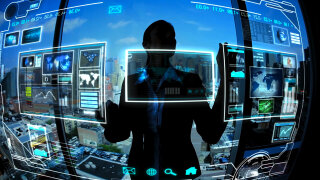 Fw:Thinking: Working in the Office of the Future