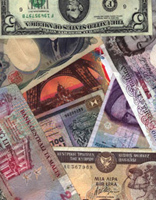 You've probably heard the financial reporter on the nightly news say something like, "The dollar fell against the yen today." But, do you know what that means?

In this article, we'll tell you what exchange rates are and explain some of the factors that can affect the value of currency in countries around the world.

The Cost of Money

National currencies are vitally important to the way modern economies operate. They allow us to consistently express the value of an item across borders of countries, oceans, and cultures. We need exchange rates because one nation's currency is not always accepted in another. You can't walk into a store in Japan and buy a loaf of bread with Swiss francs. First, you'd have to go to a bank and buy some Japanese yen with your Swiss francs. An exchange rate is simply the cost of one form of currency in another form of currency. In other words, if you exchange 1 Swiss franc for 80 Japanese yen, you really just purchased a different form of money.

You can express that exchange rate as:

A Brief History of Exchange Rates

For centuries, the currencies of the world were backed by gold. That is, a piece of paper currency issued by any world government represented a real amount of gold held in a vault by that government. In the 1930s, the U.S. set the value of the dollar at a single, unchanging level: 1 ounce of gold was worth $35. After World War II, other countries based the value of their currencies on the U.S. dollar. Since everyone knew how much gold a U.S. dollar was worth, then the value of any other currency against the dollar could be based on its value in gold. A currency worth twice as much gold as a U.S dollar was, therefore, also worth two U.S. dollars.

Unfortunately, the real world of economics outpaced this system. The U.S. dollar suffered from inflation (its value relative to the goods it could purchase decreased), while other currencies became more valuable and more stable. Eventually, the U.S. could no longer pretend that the dollar was worth as much as it had been, so the value was officially reduced so that 1 ounce of gold was now worth $70. The dollar's value was cut in half.

Finally, in 1971, the U.S. took away the gold standard altogether. This meant that the dollar no longer represented an actual amount of a precious substance -- market forces alone determined its value.

The market determines a floating exchange rate. In other words, a currency is worth whatever buyers are willing to pay for it. This is determined by supply and demand, which is in turn driven by foreign investment, import/export ratios, inflation, and a host of other economic factors.

Generally, countries with mature, stable economic markets will use a floating system. Virtually every major nation uses this system, including the U.S., Canada and Great Britain. Floating exchange rates are considered more efficient, because the market will automatically correct the rate to reflect inflation and other economic forces.

The floating system isn't perfect, though. If a country's economy suffers from instability, a floating system will discourage investment. Investors could fall victim to wild swings in the exchange rates, as well as disastrous inflation.

You can see a floating system at work. Changes in the U.S. and Canadian economies have led to the Canadian dollar becoming worth more. For years, a Canadian dollar was worth about 65 cents. In 2003, it rose to 75 cents. By early 2007, it had reached about 92 cents. Look in the business section of your newspaper, or check an exchange rate calculator on the Internet, and track the Canadian dollar's rise in value yourself. Right now, economists aren't sure how high it will go.

The Foreign Exchange Market, or Forex, is the most prolific financial market in the world. Each day, over $1 trillion worth of currency changes hands.

A pegged, or fixed system, is one in which the exchange rate is set and artificially maintained by the government. The rate will be pegged to some other country's dollar, usually the U.S. dollar. The rate will not fluctuate from day to day.

A government has to work to keep their pegged rate stable. Their national bank must hold large reserves of foreign currency to mitigate changes in supply and demand. If a sudden demand for a currency were to drive up the exchange rate, the national bank would have to release enough of that currency into the market to meet the demand. They can also buy up currency if low demand is lowering exchange rates.

Countries that have immature, potentially unstable economies usually use a pegged system. Developing nations can use this system to prevent out-of control-inflation. The system can backfire, however, if the real world market value of the currency is not reflected by the pegged rate. In that case, a black market may spring up, where the currency will be traded at its market value, disregarding the government's peg.

When people realize that their currency isn't worth as much as the pegged rate indicates, they may rush to exchange their money for other, more stable currencies. This can lead to economic disaster, since the sudden flood of currency in world markets drives the exchange rate very low. So if a country doesn't take good care of their pegged rate, they may find themselves with worthless currency.

In reality, few exchange rate systems are 100 percent floating, or 100 percent pegged. Countries using a pegged rate can avoid market panics and inflationary disasters by using a floating peg. They peg their rate to the U.S. dollar, and that rate doesn't fluctuate from day to day. However, the government periodically reviews their peg, and makes minor adjustments to keep it in line with the true market value.

Floating systems aren't really left to the mercy of market forces, either. Governments using floating exchange rates make changes to their national economic policy that can affect exchange rates, directly or indirectly. Tax cuts, changes to the national interest rate, and import tariffs can all change the value of a nation's currency, even though the value technically floats.

The next time you cross a border, and trade your money for that of another country, remember that economic forces across the world helped determine that exchange rate. In fact, when you exchange currencies, you're one of those economic forces -- you're helping to set the exchange rate, too.

Although this system works pretty well most of the time, it's not always the best solution.

On January 1, 2002, the euro became the single currency of 12 member states of the European Union -- making it the second largest currency in the world (the U.S. dollar being the largest). This was, to date, the largest currency event in the history of the world; sixteen national currencies have since completely disappeared and were replaced by the euro. (For even more information on the euro, check out How the Euro Works.)

The original seed for a common currency was planted in 1946 when Winston Churchill suggested the creation of the "United States of Europe." His goals were primarily political, in that he hoped a unified government would bring about peace for a continent that had been torn apart by two world wars.

Although the euro is fundamentally a tool to enhance political solidarity, it also has the economic effect of unifying the economies of participating countries. Some of the euro's advantages, in regard to economics, include:

For more information on exchange rates and related topics, check out the links on the next page.