by Jesslyn Shields Nov 22, 2016
As more toll roads move away from cash, where does that leave drivers who don't have electronic passes? John Greim/LightRocket/Getty Images

We complain about paying taxes, but tax collection agencies usually make the act of taxation a relatively low-profile affair: a few cents on every dollar get tacked on to your grocery bill, you might pay your income taxes quarterly, the property tax on your house annually. You can write a check or even submit your payment electronically most of the time — minimal problem. But if you spend much time driving on toll roads, you probably know what it's like to really feel the taxes.

Besides laundromats and parking meters, toll road plazas are some of the only modern institutions in which you often need to have exact change on hand. Of course, not all toll roads require you to dump just the right coinage into the giant metal funnel on the side of the tollbooth before continuing on your journey, but when you encounter one unexpectedly, it can be stressful. Why, in a country where taxation has been relatively streamlined, do toll road travelers so often find themselves grubbing around between their car seats for loose change like people who don't live in the 21st century? What happens if you don't have the correct change?

"The simple answer is, if you don't have the right change to pay at the toll plaza, you'll most likely get a citation," says Tina Geiselbrecht, a research scientist at Texas A&M Transportation Institute. She says the price of the ticket varies, depending on which agency runs the toll road, but they're usually more expensive than the toll itself.

But toll roads aren't all like medieval way stations, where you'll get roughed up if you don't have enough silver to appease the local deputy of the Holy Roman Empire. (Check out this CarStuff podcast for more on that.)

According to Geiselbrecht, since the electronic toll technology was first implemented in 1989, there's been a nationwide push toward adopting all-electronic tolling because it cuts back on personnel cost at toll plazas.

That's all very modern and great, but what happens when you don't have an electronic tag for that toll road because you're from a different state?

"There is a move to make all electronic tags interoperable now," says Geiselbrecht. "So, if I'm on a toll road in Texas and have a TxTag, and I'm traveling to Florida where they have Sunpass, that information is linked, so the charges I incur in Florida will be charged to my TxTag account. There are already a lot of states that will allow you to travel seamlessly from one state to the next."

In 2010, the International Bridge, Tunnel & Turnpike Association (IBTTA), a trade organization devoted to issues surrounding toll roads, resolved to have all electronic tags interoperable by this year. This, of course, would still require us all to have an electronic tag from our home state.

It may take a while — the IBTTA hasn't yet achieved supreme interoperability yet six years after proposing it — but eventually we'll be able to drive on toll roads without getting the vapors over whether we have exact change. However, it will also mean that people who don't have an electronic tag will still get stuck, and probably ticketed, on toll roads for their lack of foresight and preparation, or ability to afford the pass. It's something that might be a hassle for people who drive infrequently, people who don't use credit cards, people of lower incomes, people who just avoid traffic — and people who may not want a government-issued tracking device installed in their car.

The more things change, the more they stay the same.

Now That's Interesting
Road tolls are an old idea. In Greek mythology, newly deceased souls had to give a coin called an obolus to Charon, the ferryman who carried them across the river Styx to the world of the dead.

Shotgun Marriages Are on the Rise — And in Surprising Places

Women Who Have Kids Later May Live Longer, Study Finds 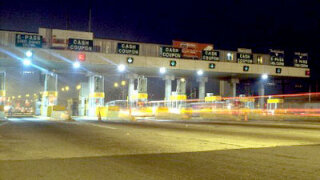