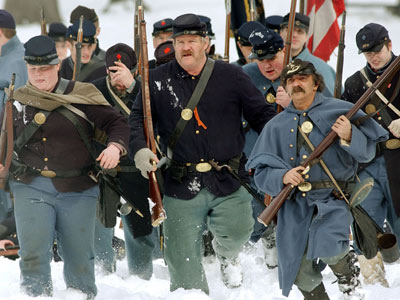 Reenactors are dedicated enough to perform in harsh conditions for the sake of getting the full experience.
Mark Mainz/Getty Images

For many people, there's nothing drier than a dense history book. There are alternative ways to get your history education. If you crave intrigue and a dash of melodrama, historical fiction can make the past come alive. While these stories may transport you to Elizabethan England or ancient Rome, they're still fiction, after all, and don't always provide authentic history lessons. So, many die-hard history-lovers volunteer in historical reenactments for an action-packed and enlightening experience.

Across the United States, Civil War battles rank among the most popular events to reenact -- they're often held on the original battlefields for true authenticity. But if you're more interested in other wars or time periods, don't despair. There are reenactment groups for almost any era that captures your interest, such as ancient Rome, the Middle Ages, the American Revolution or either of the World Wars.

In historical reenactments, people from all walks of life gather together, dressed head-to-toe in period clothing. Each reenactor has a specific role to play, so volunteers are expected to have extensive knowledge of the historical event as well as the time period in which it occurs. Each reenactment is a unique experience that allows participants to see through the eyes of a historical person and undergo all the hardships that go along with the times -- short of actually being killed in battle or catching typhoid.

A more specialized type of reenactment is living history, which requires reenactors to adopt specific historic personas and engage directly with the public to educate them about a certain period. These reenactors can make a modest living by working in museums or historic sites such as Plymouth, Mass., or Williamsburg, Va.

If you're thinking about volunteering in a historical reenactment, experienced reenactors will tell you that you shouldn't delve into this hobby without knowing what you're getting into. Too many curious volunteers have spent hundreds of dollars on costumes and equipment only to find out that the experience is more grueling than they bargained for. But if you've got the mettle and undying enthusiasm for history, we'll walk you through the basics of how to get involved. 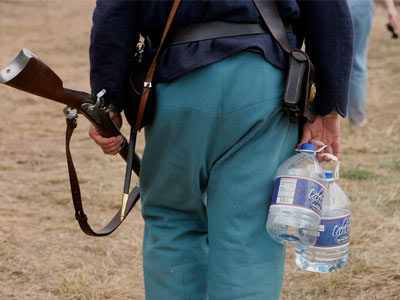 On hot days, you might want to bring your own water, but consider putting it in a period canteen, lest you ruin the effect.
Joe Raedle/Getty Images

If the idea of volunteering in historical reenactments is appealing to you, the first thing you should do is attend some of these events as a spectator. Check your local newspaper or search the Internet to find a reenactment near you. Reenactments are family events, so feel free to bring the kids, too. They'll have fun watching the excitement, and you'll get to teach them about history. In many war reenactments, there aren't roles for women on the battlefield, but some events have side attractions geared toward women, such as tea parties, craft activities and quilt shows.

As a spectator, you have a great opportunity to get a preview of what volunteering is like. In particular, take notice of the grisly conditions a reenactor has to deal with -- especially in battle reenactments. If the unit is dedicated to historical accuracy, the accommodations will be meager. For reenactments that span several days, this can be grueling. In addition to having to wear hot, uncomfortable clothing, participants can forget about sleeping in comfortable beds, eating decent food and taking hot showers. What's more, you could get hurt. John Miller, a veteran reenactor who specializes in the Civil War, warns prospective volunteers that the hobby can get dangerous [source: Miller]. The weapons that reenactors carry are real -- and loaded. It might be a good idea to spring for the unit's annual fee for insurance coverage in case of an injury.

Of course, you might decide that Civil War reenactments aren't your cup of tea, and you'd prefer to dabble in the Colonial era. Keep attending reenactments until you find a period that suits your specific interests and talents. Once you do, it's time to create your own historical persona. You'll also have to brush up on the language and customs specific to the era. And many battle reenactment societies require that you acquaint yourself thoroughly with the manual of arms. This manual includes such things as company tactics and firing details [source: Miller].

Historical reenactors are known for being sticklers for accuracy. This is especially important when it comes to clothing and weaponry, as we'll see on the next page. 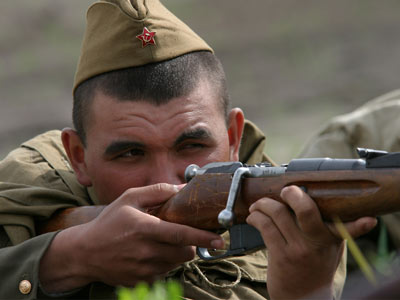