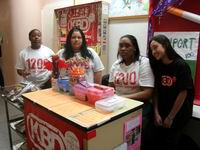 Do Something Clubs are groups of young people who have joined together to work toward changing the world. Put simply, they are clubs that Do Something.

They grew out of countless e-mails Do Something received from kids all over the country who complained that the local community service clubs in their areas and at their schools weren't cutting it. They were boring. They were filled with red tape. They didn't do anything.

The Do Something Clubs will never be accused of not doing anything. Anyone who wants to can start one at his or her school for free. Just get a group of five or more young people together (no adults required by Do Something, though the school might require one), plan to tackle at least two long-term projects over the course of the school year, and let Do Something know what the club has accomplished and what measurable impact it has had on the community. There are no fees, dues, deadlines, uniforms, or anything else. The clubs belong to the people who create them, not to Do Something. But Do Something helps out the clubs with ideas, simple supplies, and other support. Clubs are also eligible for $500 grants to help fund the cause.

Do Something Clubs have done all sorts of amazing things. A club in Boston held a "Kick Butts" day to help motivate teens to do something about teen smoking. A club in Kansas held a toy drive for underserved children in their area. In New Jersey, a Do Something Club held a canned food drive over Thanksgiving. There are clubs all over the country, helping people and making an impact.