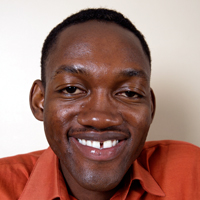 When civil war broke out in the African nation of Liberia in 1989, nine-year-old Kimmie Weeks was just another child caught in the middle. Each day, he saw the death and suffering of children like himself. After a near-death experience at the age of 10— he became so weak and ill that men in the refugee camp began digging a shallow grave for him— Kimmie decided to work the rest of his life to ensure that no child would ever have to live with extreme malnutrition, disease or poverty.

At the age of 13, Kimmie started Liberia's first child rights advocacy and humanitarian organization run by young people: Voice of the Future, Inc. Two years later, he founded the Children's Disarmament Campaign, which worked with UNICEF to end the Liberian civil war and disarm the country's 15,000 child soldiers. When Liberia experienced a general disarmament the next year, Kimmie founded The Children's Bureau of Information, Liberia's first children's information service, which worked to reintegrate former child soldiers into the community.

In 1998, Kimmie wrote and published a controversial report on the Liberian military’s practice of training children. Because of this report, several attempts were made on his life. Kimmie was forced to flee Liberia under a false name and seek political asylum in the United States, where he continued his work as a vocal advocate of children's rights.

In 2002, Kimmie started Youth Action International (YAI), a network of young people dedicated to helping children affected by war or living in difficult circumstances. YAI currently runs humanitarian programs in a number of African nations, and their programs include a center for empowering women in Sierra Leone, building schools and orphanages in Liberia and providing emergency medical care to the Karamojong people in Uganda.

Now 25, Kimmie has been named a 2007 Golden BRICK Award Winner in the category of Global Impact. We recently had a chance to sit down with Kimmie and ask him about his past, his work with Youth Action International, and what the future holds for him:

HowStuffWorks: As a child, you were a victim of civil war and came face to face with the lowest of the low in human existence. Most people would feel lucky just to survive, yet you became a world-renowned child activist. What was it about your experiences that inspired you to follow the path you're on?

Kimmie Weeks: There was a point during the war where I nearly died from the sickness and disease and going without food. And that night, I was 10 years old, I made the commitment to God that if I survived the camp, if I survived the war, that I would work the rest of my life to make sure that no child would live in the conditions that I lived in, without food or water.

HowStuffWorks: Do you find in your work that your experience gets you more respect from people than someone else your age might get?

Kimmie Weeks: Definitely. I usually say to people that if the war hadn't happened, I'd have been a normal kid doing normal stuff. A lot of our supporters are people who were drawn in by the story. And not just the story of the suffering, but of what happens after that.

HowStuffWorks: You are a very inspiring figure. Who inspires you?

Kimmie Weeks: My mother is the first and foremost. She's not involved in politics or human rights work, but she's a very strong person, a very determined person. If she says something, it's going to happen, and she's been a motivating factor in my life.

On an international level, Nelson Mandela and Martin Luther King. They came from nowhere and worked to make a difference starting movements. That's why I believe so much in the youth movement and trying to support the process of building that up. Seeing young people, who make up such a huge part of the world's population, becoming involved and changing the world together.

HowStuffWorks: After working in Liberia for a few years, you were forced to flee. Was it difficult to get out of the country?

Kimmie Weeks: Very difficult. When I had done the report at the end of '98, I didn't think there would be a government backlash of that scope. I remember the first day the soldiers came. I was in the office, not expecting them, and they came up looking for me, I was right there, and they asked me for Kimmie Weeks and I said "Never seen the guy, don't know where he is." Then immediately after they started deploying troops at my home, they shut down my school and deployed soldiers there. I started staying at friends' houses and I would leave after a day or two and the soldiers would come right after. It was three weeks into it that a friend in government came and said, "We want to help you get out." And the way I left was they disguised me as a traditional dancer and the story was that we were going on a national tour. And I climbed into a jeep and we drove from the capital to the Ivory Coast. They had given me a passport under the name Gregory Coleman. That's how I crossed into Ivory Coast and then came to the States.

HowStuffWorks: Were there people waiting for you when you got here?

Kimmie Weeks: Yes, I actually have an older brother and sister who live in the U.S. in Delaware, so my sister came and picked me up.

HowStuffWorks: That must have made it a lot easier for you.

Kimmie Weeks: It made it much, much easier. I'd been to the States once before, in '98. I had come for the Goodwill Games, I was receiving a medal, but that was like five days of intense stuff, it wasn't like moving to the U.S.

Also, the last time I was in school was in '89 before the war had started. Then I came to the States in '98, so there was a huge gap in my education and I came directly to the 12th grade. So it was quite intense.

HowStuffWorks: Do you still have family in Liberia?

Kimmie Weeks: My mom's still there.

HowStuffWorks: Has she had any problems being your mother even though you're not there?

HowStuffWorks: Now that he is no longer in power, are you …

Kimmie Weeks: Yes, I went back immediately, four months after he left power. There were still threats against me. The interim government said, "There's a risk if you come." When I got to Liberia there were three different security groups provided by the government because Charles Taylor was still trying to find me. But the last time I went back I went back without security. It was hard, arriving at a place and there [were] 20 bodyguards jumping up and you're trying to visit clinics and stuff like that.

HowStuffWorks: What can you tell me about Youth Action International?

Kimmie Weeks: Youth Action International I started in 2002 after coming to the States and hearing that American students didn't know about conditions in Liberia, or how to help. We started simply by fundraising for other organizations. In 2005 I said, "Rather than just fundraise for other people, let's show that young people can actually lead an international organization." So we started our first offices in Liberia and Sierra Leone and Ghana. We've now expanded to Rwanda, Burundi, and Uganda, where we're doing a series of programs benefiting thousands of people in each country.

HowStuffWorks: What kind of programs?

Kimmie Weeks: It differs from country to country. In Sierra Leone we're doing a center for [women’s] empowerment, we're giving women counseling, vocational training, and micro-credit loans at the end of it. In Liberia we're building schools, rebuilding playgrounds and building orphanages. We have acquired 500 acres, essentially to do training for former child soldiers. We have 20,000 children who fought in the Liberian war hanging around, not knowing what to do and it's a great risk of the war [recurring]. So we're looking for practical ways to give them sources of income. In Uganda we're leading efforts to provide emergency medical care to the Karamojong. We're also working to resettle them where they can do their own farming.

HowStuffWorks: Are you having any difficulties with the governments of any of these countries as you come into them?

HowStuffWorks: Are you a threat to them?

Kimmie Weeks: Sometimes. We're addressing issues that people don't want to change. Last time when I was in Uganda, when we started to address the Karamojong. I was meeting with some ministers. The Prime Minister was calling in to ask, "Who's asking questions about these things?" Sierra Leone has a law that bans women from owning land, we're working to change that, and that's going to have issues, not just from the government side but also from men, culturally as well. So it's not an easy task. But I'm just on the path of you gotta do what you gotta do.

HowStuffWorks: What is the future of YAI?

Kimmie Weeks: The goal is within five years to be in every post-war African country, and then starting to expand outside of that.

HowStuffWorks: Will you still be with them at that point?

Kimmie Weeks: I am going to be with YAI at least until I'm 30. After that I'm planning to do more work in another organization. Eventually I will do national politics. I'm planning to run for the presidency [of Liberia] in 12 years.