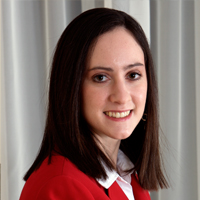 Yale college student Jennifer Staple was working in an eye doctor's office over the summer when she learned just how many people suffer from very preventable causes of blindness. She decided then and there to do something about the problem. She founded Unite for Sight in 2000 to bring free and easy eye screening and education to people in her local

Upon graduation in 2003, Jennifer decided to expand Unite for Sight, with chapters starting up at colleges across the country. International chapters soon followed, and Unite for Sight became a global eye care provider. Today, Unite for Sight currently delivers eye care screening and education programs to more than 400,000 people through 90 chapters. Working mainly in North America and in developing countries around the world, the organization has sponsored more than 6,000 sight-restoring surgeries and has provided thousands of people with treatment for infections, glaucoma, and other eye disorders. The chapters have also collected and distributed over 200,000 pairs of eyeglasses.

In February 2005, Unite for Sight expanded beyond eye care, with the launching of the Buduburam Microenterprise Initiative in the Buduburam refugee settlement in Ghana. The program is meant to give refugees a source of income and support the eye care operations within the camp.

Jennifer, now 25, was named a 2007 Golden BRICK Award Winner in the category of Health for her work with Unite for Sight, bringing quality eye care to underserved people throughout the world.

We had a chance to sit down with Jennifer and ask her about her inspiration for Unite for Sight, how it has expanded internationally, and what the future holds.

HowStuffWorks: Jennifer, what inspired you to start Unite for Sight?

Jennifer Staple: I'd been working at an eye doctor's office in Connecticut between my freshman and sophomore years in college and was working with a lot of patients with glaucoma, which is a very gradual eye disease -- the blindness is preventable simply with medication eye-drops, for example. And a lot of these patients had never been to an eye doctor before and said that they wished they had been to an eye doctor before they lost their sight. So it was [through] hearing several of those stories throughout the summer that I realized the importance of educating people about going to an eye doctor and also providing resources if they did not have health insurance, for example. So it started as a small idea and a small student organization at Yale, which is where I was for college at the time. And then, after three years developing that model in New Haven, I started expanding it, first throughout the U.S. to other universities, and then quickly from there internationally to other communities worldwide.

HowStuffWorks: How, exactly, did you start your program? How did you get it off the ground?

Jennifer Staple: I started by recruiting other students, undergrads at Yale. And also contacting soup kitchens, libraries, and schools and asking if they would need vision screenings, for example, for the people who were there. So it was initially contacting the community centers, and then recruiting students. And then providing the student volunteers with training so they knew, for example, how to do a basic visual acuity screening.

Also, doing a lot of research about, what about people who don't have health insurance, how can they get eye care? I learned there's a lot of different free health coverage programs, through, for example, the American Academy of Ophthalmology, the American Optometric Association, and then other programs that provide free eye care for people who qualify as being low income, for example. Then based on that research, and the training, and finding the community centers, I was able to start the programs in those centers, to be able to provide those services.

HowStuffWorks: At what point, after you started, did you think that this was a franchise model that you could expand?

HowStuffWorks: So now the communities and universities that want to do this, they come to you?

Jennifer Staple: Yes, exactly. We have applications on the Web site. We actually have two different types of programs. One is continuing the same model of community programs at universities and also in communities where they provide these education programs. And then also partnering with eye clinics internationally that are small, small clinics [that] don't have very much staffing or funding to be able to provide eye care for poor patients in rural villages. So we work with those eye clinics. They may have one optometrist or one eye nurse in the eye clinic that can go to rural villages, but that one person can't do very much just themselves. But by sending local volunteers -- for example, in Ghana, local Ghanaians volunteer -- and then also volunteers from the U.S., Canada, Europe, Australia, send them over also to provide these volunteer services. So then the optometrist and the whole group can go into a rural village and screen about 200 people in a single day and identify patients who need the eye care.

HowStuffWorks: Tell us about the Buduburam Microenterprise Initiative in Ghana.

Jennifer Staple: At Buduburam there's the eye care and also this microenterprise program where we work with women who previously did not have any income and they create jewelry and also eyeglass cases. Then we're able to sell those eyeglass cases and jewelry on the Internet. So we pay the women $1 for each eyeglass case and $5 for each piece of jewelry they create. And we sell the eyeglass cases, for example, for $8 through the Internet and also at university campuses. So that's $7 of proceeds that goes directly to providing eye care services at Buduburam refugee camp. That goes directly back to the community.

HowStuffWorks: Has this been successful so far? Do you see bringing this microenterprise program elsewhere?

Jennifer Staple: Yes, it's been very successful. We also work with a community-based group in El Salvador that does something similar, although we don't have an eye care association there. But it's again selling eyeglass cases that the women are making and paying the women for those eyeglass cases. And something new, actually, that we are currently working on is having villages in India do something very similar where they create something and then we can sell it, giving them income.

HowStuffWorks: But you don't have eye clinics in India yet?

Jennifer Staple: We don't actually put eye clinics in locations but work with existing clinics. We do have a lot of programs in India, so these would then be outreaches into the villages, and the microenterprise programs would be in the same villages in which we currently provide the screenings.

HowStuffWorks: What are some of the most memorable moments you've had while working with Unite for Sight?

Jennifer Staple: Just going there and seeing it in action, all the different programs. Seeing the patients so happy after they have their surgery. And then also, for example, Buduburam Refugee Camp. Even though they don't have any eye care facility -- they have one physician, they are so underserved -- they have an Internet café. So all of them use the Internet there, all the local refugees. I receive a lot of e-mails from both the local refugee volunteers who volunteer for the microenterprise program and also a lot of patients, and it's so motivating and inspiring to hear their stories.

HowStuffWorks: You hold international conferences through Unite for Sight. This year will be your fourth. What sort of work is done at these conferences?

Jennifer Staple: It started initially with just eye care in the first year when we had it in New York City. But then thinking about all the exchange of ideas that can happen in a forum like a conference, we wanted to start expanding it beyond just eye care. Bringing in people, for example, who are interested in AIDS and interested in social enterprise, and malaria, and also a large component of eye care. So that people can come together and learn from each other. So if they're doing AIDS work they can also learn about eye care and different strategies used. And also perhaps the people who are in communities, working on AIDS, can also start thinking about providing those communities with eye care.

HowStuffWorks: What is the focus of this year's conference?

Jennifer Staple: [The] specific mission of this year's conference is to exchange ideas to achieve global goals. Solutions for global goals. Each year has a different mission statement, but it's always about international health and also bringing social enterprise as well. Social entrepeneurialship.

HowStuffWorks: What are your personal plans for the future?

Jennifer Staple: Currently I'm in medical school, and I'm planning to become an ophthalmologist. I'd like to use the skills and training that I develop becoming an ophthalmologist to continue enhancing and expanding the Unite for Sight programs.

HowStuffWorks: So this is a life-long pursuit for you?