by Dave Roos Nov 6, 2019
It's easy to think that someone with differing political beliefs is a fool. But what if you have to work with this fool? HowStuffWorks

There you are, innocently microwaving last night's left-over burrito in the office kitchen, when a co-worker with polar-opposite political views saunters over and asks with a smirk, "Did you watch the debate last night?"

What are you supposed to do? You know she's itching for a fight — frankly, so are you, after the nonsense her candidate spewed yesterday — but you know how these things always end. You shout past each other for a few minutes, no one changes their mind, and you end up retreating back to your desk with heartburn and cold carne asada.

Politics has always been a touchy subject at work, but now it's become downright toxic. Extreme polarization of the political landscape means that most of us barricade ourselves in likeminded bubbles and only spar with political opponents from the safety of social media.

But the workplace is a unique space. It brings together people from all sorts of different backgrounds and perspectives, and unlike slinging insults with strangers on Twitter, you have to see your co-workers the next day. It's hard to accept a team member's constructive feedback on your sales presentation if you almost came to blows in the break room over immigration policy.

That's why so many people avoid workplace political discussions altogether. According to a survey taken during the heated 2016 presidential campaign season, 79 percent of respondents ranked "co-workers" as the least likely group they'd talk with about politics, even less so than neighbors or complete strangers.

And an October 2019 survey of more than 1,000 workers showed that 66 percent felt that talking politics at work was more common now than five years ago, but only 22 percent thought the conversations were appropriate.

So, where does that leave political discussions at work? Does it mean that work should be a politics-free zone? Or can political conversations, when done right, actually improve workplace culture?

Before you pin a "Down with Don" button on your laptop bag or forward a pro-life email to your management team, you should know that the U.S. Constitution's cherished free speech protections don't extend to the office.

The First Amendment only restricts the U.S. government from censoring speech. Private businesses are allowed to set their own rules governing political expression in the workplace. (A 2016 survey of HR executives showed that only 3 percent of their companies had official or unofficial guidelines about discussing politics at work.) Generally, those rules fall under three general categories: nonsolicitation policies, dress codes and anti-harassment policies.

If you distribute campaign flyers or send emails supporting a specific candidate or ballot measure, that could be considering soliciting. And if you wear a T-shirt, button or bright-red baseball hat that supports a political campaign or issue, that might violate your office's dress code. Check with your HR department about both.

But the most serious and thorny issue with political discussions in the workplace is opening yourself up to accusations of harassment or discrimination. Since political conversations often get heated, a co-worker might feel like he's being singled out and harassed for his views. And when political topics touch upon sensitive issues of race, religion, gender and sexuality, a disgruntled party could claim workplace discrimination.

Bosses and managers also have to be consistent in how they enforce these workplace policies. You can't allow an employee to wear a MAGA hat to work and then ask someone else to remove a pride sticker from their cubicle. According to ComplyRight, an HR website, employers need to "address the disruption and not punish the perspective," or else the company itself could be sued for discrimination.

If you're careful to stay within your employer's policies about political expression, there are actually some really good reasons to talk politics at the office. Justin Hale is a speaker and trainer at VitalSmarts, a leadership training company. He says that most people are genuinely interested in political topics, but we've been scarred by bad experiences with co-workers.

Instead of clamming up about politics completely, Hale says there are ways to talk politics with people who share opposing viewpoints that can actually build mutual trust and respect instead of tearing those bonds apart.

It starts with finding common ground. When we learn that a co-worker shares an opposing or even offensive political opinion, our instinct is to look for all the ways in which they are different than us, says Hale. That makes it easier to judge them as the "enemy" or dismiss their opinions as ignorant or even "evil."

But if you seek common ground instead, it's possible to preserve respect for the person even if you don't respect their opinion. That common ground can be as simple as a shared desire to make the world a better place for yourselves or for your children. You might disagree radically on what's "wrong" with the world, but it establishes that your intentions are good.

"Try to humanize the other person and not demonize them," says Hale. "It's the humanizing component that every political discussion could use more of."

It's unrealistic to think that anyone will change their deeply held political opinions after a single conversation, no matter how compelling your argument. In fact, the more you try to convince someone that they're wrong, the more likely they are to get angry or hurt.

"You can screw up these conversations before you even open your mouth," says Hale. "If your motive going into the conversation is to 'win,' I promise that it's going to turn into one of those bad experiences that you avoid all the time."

At VitalSmarts, Hale and other leadership trainers teach bosses and workers how to have "crucial conversations," the kind of tough workplace discussions where "the stakes are high and emotions run strong." The end goal of these conversations isn't about changing somebody's mind or behavior, or even persuading people to see things your way.

"The goal is to create an open dialogue where I feel psychologically safe to share my view and you feel totally safe to share yours," says Hale. "Psychological safety is this belief that you and I, no matter if we disagree or not, are going to have some element of mutual respect."

And that, at the end of the day, is how you want to feel about all the interactions you have with your co-workers. Joseph Grenny, co-founder of VitalSmarts and author of "Crucial Conversations," told the Harvard Business Review that learning how to talk productively and respectfully about politics can help us "manage other difficult conversations at work," like disagreements over a business strategy or workplace policy. He suggested in a political discussion that you ask the other person questions to find out how they arrived at their worldview and show respect by validating the other person's right to have a differing opinion. Also, look for areas of common ground – for instance that both of you love your country, your kids or your families. (Say, for instance, "So, even though I disagree with you about X policy, I can see you're passionate about wanting your kids to succeed in life.")

If you can talk about politics at work and walk away feeling heard and respected, if not agreed with, then you've made your entire workplace culture a little healthier.

Now That's Cool
Most states protect an employee's right to take time off to vote. In Texas, it's a crime for employers to punish an employee for missing work to vote.

Can You Be Allergic to a Hypoallergenic Dog? 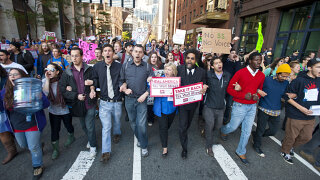 10 Rights the First Amendment Absolutely Does Not Grant 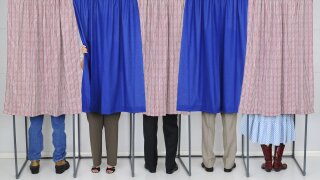 Is it rude to ask who someone voted for? 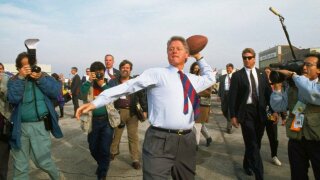 Why It's So Hard to Change Minds and Earn Votes