The 14th Amendment and Artificial Personhood 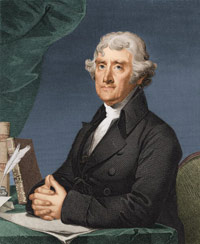 During the framing of the Constitution, Thomas Jefferson wanted language that restricted corporations added to the document. His ideas didn't make it.
Stock Montage/Getty Images

Since corporations had been viewed as artificial persons for millennia, the debate over whether they should be afforded the same rights as humans had been raging long before the 14th Amendment was adopted. Thomas Jefferson had suggested explicit language to govern corporate entities, like requiring maximum life spans, be put into the Constitution. His stipulations didn't make the cut, however. And once the 14th Amendment was created, the Constitution actually expanded -- rather than limited -- the scope of corporations' power.

The 14th Amendment was adopted in 1868, and it gave the federal government ultimate power over the states in respect to the rights of newly freed slaves. The amendment sought to overturn state-level legislation that was being created to limit the liberties of freedmen after the Civil War. The federal government circumvented each one of these laws with a broad sweep: Through the 14th Amendment, Congress granted equal protection under the law to every person [source: Library of Congress]. That last word is important, since in the eyes of the law, a corporation is an artificial person.

While the 14th Amendment opened the door for corporate Constitutional rights, the issue wasn't really addressed until 1868. A dispute over whether a county has the right to tax a corporation turned out to settle this much larger issue in a very strange way.

In the case of Santa Clara County v. Southern Pacific Railroad, the Supreme Court decided that only the state that charters a corporation can tax it. This decision upheld the long-standing custom in America of state governance of corporations. It's the state that grants a corporation its charter -- its license to do business -- and it's up to the state to tax and regulate the corporation.

But a note written by the court reporter at the heading of the decision went further than that. Although another, private note from the Chief Justice said that the court had purposely avoided the issue of Constitutional corporate protection, the reporter chose to make his own addition to the records. He noted that the court had decided that corporations are persons under the 14th Amendment, and as such are subject to the same protections under the law as anyone else [source: Hartmann].

What's strange, Hartmann points out, is that the justices hadn't ruled that way at all. Even fishier, the court reporter was a former railroad president [source: Hartmann]. Ultimately, since it was a headnote (a commentary prefix to the court record) written by the reporter, it didn't constitute law. But it did set precedent. Two years later, this idea was upheld in another case: Pembina Consolidated Mining and Milling Co. v. Pennsylvania [source: Aljalian].

Just how much Constitutional protection corporations should be afforded is still being hammered out today, court case by court case. Read about some of these cases on the next page.