How Will Panhandlers Fare as Our Economy Goes Cashless?

Browse the article How Will Panhandlers Fare as Our Economy Goes Cashless? 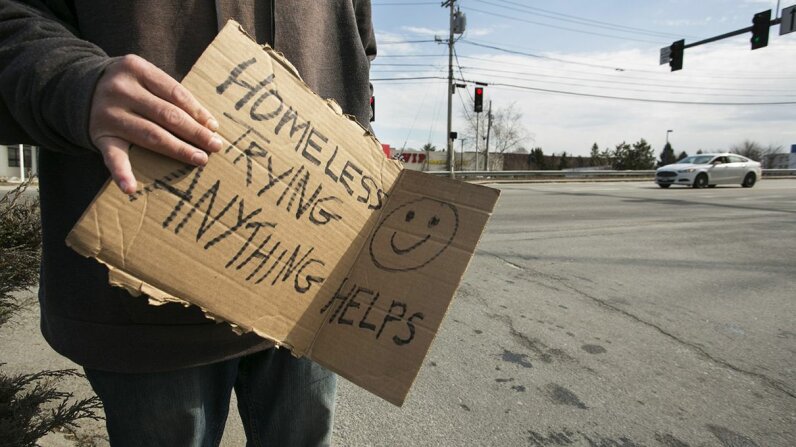 As the developed world moves to digital payment, does that leave behind those asking for cash? Gregory Rec/Portland Press Herald/Getty Images

In 2016, Detroit resident Abe Hagenston attracted international attention after local news media reported that he was panhandling not just for spare change, but for donations via credit card, using a card reader attached to his cell phone. Hagenston, who was homeless, also built his own website to solicit spot jobs, which he reportedly updated from a computer at a local library. "Being homeless is my business now," he explained to a reporter from local TV station WDIV.

News coverage of the tech-savvy panhandler eventually subsided, and the phone number on his website no longer works, so it's difficult to assess the success of his efforts. Judging from the number of people still positioning themselves on sidewalks or traffic islands with cardboard signs and paper cups in search of donations from passersby, it still seems that the vast majority of panhandling remains stuck in the analog age in an increasingly digital world.

But with consumers increasingly using various forms of plastic and phone apps instead of cash to make purchases, it raises the question of whether panhandling — a tradition that dates back centuries — soon could go the way of telegrams and gaslights in the cashless society that many envision. As Slate technology writer Will Oremus asked in 2012: "What will become of the loose-change business model if society goes cashless?"

There are signs that we're headed in that cashless direction, though we're not there quite yet. A recent study by the Federal Reserve Bank of San Francisco found that the portion of consumer purchases made with cash dropped from 40 percent in 2012 to 32 percent in 2015, and that 59 percent of what we buy is now paid for with credit and debit cards and electronic transfers — up 10 percent from three years prior. And while we're still using paper bills and coins to make 62 percent of purchases less than $10, a 2014 Bankrate.com survey  found that two out of five Americans carry less than $20 in their wallets or pockets — and nearly 10 percent of all Americans no longer carry any cash at all.

Americans carry less and less cash each year, as payments move to digital and card-based solutions. How do those who rely on spare change fare?
Jeff Speed/Getty Images

Researchers who've studied panhandling say the shift away from cash hasn't yet had a significant impact. "People might carry less than $50, but average donations are only a few dollars, and people seem willing to share their loose change," says David Spears, who spent a brief time panhandling on a freeway ramp in Oregon to gather data for his 2013 book "Exit Ramp: A Short Case Study of the Profitability of Panhandling." As he says in an email to HowStuffWorks: "I don't see that really affecting the success of panhandling to a great degree. One in 10 might not carry cash, but nine in 10 carrying cash is still a large target to ask charity from. Panhandling is a volume game."

Gwendolyn Dordick, a lecturer in sociology at City College of New York, and Columbia University economics professor Brendan O'Flaherty conducted an in-depth study of panhandlers in downtown New York City, in an effort to discover how panhandling in the street worked as an industry. (One finding: Panhandlers tended to work regular shifts of several hours in their usual locations, rather than soliciting until they reached a specific goal for the amount of donations.) They seemed skeptical of the premise that a cashless society would ever make panhandling extinct. "For some legal transactions — small purchases like a bagel — cash may still be quicker and people will continue to carry small amounts of cash," Dordick and O'Flaherty said. "Small amounts are what panhandlers need."

That said, Dordick and O'Flaherty can imagine more panhandlers eventually trying to collect cashless donations, and think it might even work better for both donors and recipients.

"Most of the panhandlers we met carry cell phones, so it is not inconceivable that they could accept funds electronically," they say. "In fact, the transfer of electronic funds could benefit both panhandlers and potential donors if having an app was regulated or distributed in such a way as to provide some kind of credential. This credential would signal to potential donors that this panhandler was not 'scamming' them."

Now That's Interesting
The smartphone donation app WeShelter is intended for when a user sees a homeless person in the streets; they can press a button, and a sponsoring company will make a contribution to a homeless services organization in the area. (Users can also make contributions at any time.)