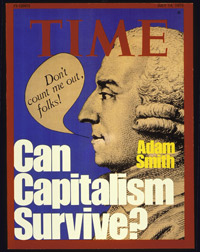 Capitalism clearly goes beyond economics. It's impossible to talk about capitalism without talking about political and social viewpoints. Capitalism is rooted in views about individual rights, liberty and human nature. In theoretical capitalism, the world revolves around the individual, the individual is inherently good, and individual self-interest benefits society as a whole.

­But what happens in the actual practice of capitalism is sometimes quite a different story. With the establishment of an owner class and a working class, the distribution of wealth becomes extremely uneven. When the laborer is dependent on the capitalist for his livelihood, distrust, anger and unrest may develop. These basic truths have led to the end of pure capitalism throughout the world. What we now call capitalism is in fact a mixed economy. The exclusion of government from economics just didn't work.

Beginning in the early 1900s, governments started intervening to protect the working class from the owner class. In the U.S., Congress passed laws that made child labor illegal, capped the length of the work day and banned monopolies. To some, the anti-trust laws of the 1920s seemed to go against the values of capitalism, which they partly did. However, competition is also crucial to the self-regulation necessary for capitalism. Monopolies eliminate competition, which means the economy is no longer in its natural state.

The 1929 stock market crash and the subsequent Great Depression brought about more changes. Franklin Roosevelt's New Deal administration created jobs with the purpose of raising employment levels and poured government money into the economy to try to end the depression. Congress passed the Social Security Act -- removing the worker's complete control of his or her earnings. The mandatory withholding of pay was meant to protect workers from capitalism's natural ups and downs. Mandated unemployment insurance did the same.

In the 1930s, the British Economist John Maynard Keynes published a new take on capitalism. Keynes believed that government intervention can help stabilize a capitalist economy. By varying taxes and spending and manipulating interest rates, the government can keep the money supply level and protect the economy from the "boom and bust" periods inherent to the capitalist system.

Keynes' economic theories contributed to the U.S. Congress passing the Employment Act of 1946, which put the responsibility of economic stability squarely in the hands of the federal government. With that, laissez-faire economics was officially dead in the United States.

No one is sure what the future holds for our evolving economy. The "market" is now the entire world. China, which was the last major country to maintain a Marxist economic system, has in recent decades introduced elements of capitalism to its economy in order to join the global marketplace. Traditionally capitalist countries like Britain, Canada and the United States have increasingly introduced restrictions on economic activities in order to promote the general social good.

The call for universal healthcare in the United States hints at a further swing toward the socialist economic viewpoint that individual self-interest does not necessarily lead to overall social welfare. With no purely capitalist nor purely planned economies left among the world's major financial players, and with the expansion of far-reaching trade agreements, the future of economics seems to point at a broad market that, economically at least, all but erases national borders and connects the world through financial mobility.

To learn more about capitalism and other economic systems, look over the links below.