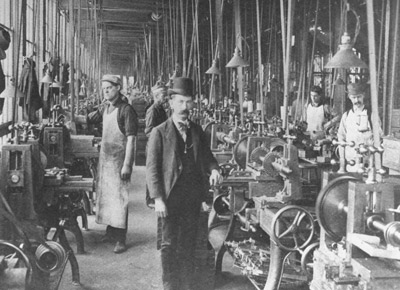 Befor­e the Industrial Revolution in the 1800s, countries like Britain and the United States had true capitalist economies. With industrialization, though, came sweat shops, social protest and resulting government intervention in the form of fair labor laws. That's when real capitalism ended.

Today, the economies of nations that are typically referred to as capitalist are in fact mixed economies -- they incorporate certain aspects of capitalism and certain aspects of planed economies. In pure capitalism, things like child labor laws, Social Security, anti-discriminatory hiring practices and a minimum wage have no place. Capitalism rejects all government intervention in economic matters.

The basis of capitalism is individualism. The economic system stems from humanistic ideals of the 18th century European Enlightenment -- beliefs that each human being is individually unique and valuable. This mode of thinking was a turning point. Before the Enlightenment, governments didn't talk about human rights. But in this vision of humanity, a society made up of unique individuals who pursue their individual interests is healthy -- it's characterized by progress, spiritual and worldly wealth, and liberty. Individuals are not just free to pursue self-interested goals; they should pursue self-interested goals.

The added philosophical view that turns the social concept of individualism into the economic concept of capitalism came from Adam Smith in the late 1700s. His book, "An Inquiry into the Nature and Causes of the Wealth of Nations," had a profound effect on economic principles. Before Smith, the economic self-interest of the individual was seen as counterproductive -- or at least non-contributory -- to the economic welfare of society as a whole. Smith disagreed with this belief. He suggested two concepts that ultimately became the basis of capitalism:

­Smith's overall view is that an "invisible hand" guides the economy through the combination of self-interest, private ownership and competition. The end of this natural economic balance is general social wealth. In other words, everybody benefits.

­How can private profit lead to public good? On the next page, we'll learn about the process of capitalism.

Capitalism creates and thrives in a consumer culture. If no one's buying products, the system breaks down. The social effects of a society that defines itself by what it buys or possesses, not by what it creates, can be seen in widespread, astronomical credit card debt and, to some, violence for the pursuit of material goods.

Ironically, in 1904, German political economist Max Weber tied the development of modern capitalism to the rise of the Puritan work ethic, which soundly rejects the accumulation of wealth for wealth's sake. He reasoned that Protestantism and the Puritan work ethic paved the way for capitalism by proclaiming the spiritual righteousness of worldly life pursuits.