Can you get rich selling stuff online?

Browse the article Can you get rich selling stuff online? 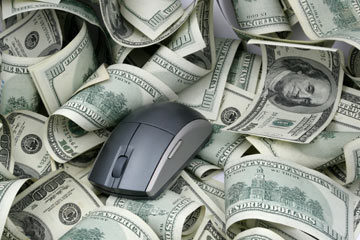 Banking Pictures We think we can do and find just about anything online. But can the Internet really make us rich? See more pictures of banking.
©iStockphoto.com/Leszek Maziarz

You can't sleep. You're up late, sitting at the kitchen table worrying about bills. The TV is squawking away in the background. Suddenly, a late-night infomercial gets your attention: "Get rich by selling online!" Like all of those late-night offers, it's tempting, but it seems too good to be true. So, is it possible to make a fortune on eBay or other online stores?

According to a 2006 ACNielsen study commissioned by eBay, 1.3 million individuals used the site as a primary or secondary source of income worldwide. The figure for the United States was around half as many. But the study didn't parse out how much money each of those 1.3 million individuals make, or how many of them use eBay as their "primary" as opposed to "secondary" source of income [source: Gross].

Infomercials that promise quick and easy riches online oversimplify the realities of the e-commerce marketplace. Dave Espino's "Auctions for Income," a book and DVD training program that promises to teach customers how to make easy money selling on eBay, has received an F rating by the Los Angeles Better Business Bureau for making "unfounded" promises of large sums of money to be made with minimum effort [source: Better Business Bureau]. Jeff Paul's "Shortcuts to Internet Millions," another program that promises income in the hundreds of thousands per week through Internet sales and marketing, has also received an F from the BBB [source: Better Business Bureau]. There are legitimate trainers and consultants who will help you set up an online store on eBay or elsewhere, but they don't make such grand promises.

It is possible to make money with online selling. Small in-house operations and large chain retailers have made big profits in e-commerce. But it'll serve you to manage your expectations. You may not get rich, but you can build a successful side business that could potentially translate into full-time income down the line. Either way, selling online requires just as much work and savvy as running any other business. You'll need to find ways to source your products, market yourself on the Web, attract customers, build and maintain a customer base, and manage a secure and reputable Web space.

In the rest of the article, we'll talk about how to build a successful online selling business as many people have done.

Who is Making Money Selling Online?

As we discussed, it's difficult to quantify just how many sellers are making a living through e-commerce sites, and just how much money they're making. One of eBay's most successful sellers is Jack Sheng, who made headlines in 2008 when he became the first seller to earn 1 million positive ratings from buyers. (EBay encourages buyers to provide feedback on their experiences with sellers after each transaction.) According to eBay's official blog, Sheng's electronics sales company, eForcity, brings in $40 million in revenue per year through sales on eBay, Amazon.com and its own online storefront [source: Brewer-Hay]. But it's important to keep in mind that it took Sheng eight years to build his business from a three-man operation in a garage to a national company with 200 employees. It didn't happen overnight.

According to the most recent U.S. Census data, in 2007 there were 106,065 retailers selling exclusively through electronic and mail-order sales. Of those, more than 84,000 were single-person operations. The average annual sales for those one-person shops were $38,330 [source: U.S. Census Bureau]. The Internet is full of small Web sites selling homemade crafts, or niche products, as well as stores for local boutiques and shops that have opened a Web portal to supplement income from their stores. In 2007, 32 percent of small retailers were selling their merchandise through an online portal [source: Tedeschi]. So, there's room for smaller retailers to make money online.

Selling through one of the larger sites has its pros and cons. eBay offers discounts on fees and more customer service access to power sellers who make at least $3,000 per year in annual sales. Those perks can be helpful, but some smaller sellers have criticized the discounts as unfair [source: Rushe]. Listing on Amazon can bring in a lot of sales. According to recent earnings statements, 32 percent of the site's total unit sales are from third-party sellers [source: Seeking Alpha]. But listings from sellers often compete with lower prices from Amazon itself. Etsy is a good site for selling handcrafts, but won't let you sell retail items. The more sites you list items on, the more sales you can potentially make, so consider setting up accounts eBay and Amazon, dabbling in smaller portals, and starting your own Web site with an online shopping cart.

Read on to find out how to get started building your online business.

To get your online business started, you need to decide what you're going to sell. Some sellers use drop shipping, which allows them to handle sales and leave order fulfillment to a third party. Drop shippers stock catalog items in bulk and ship them to customers on demand, collecting a commission along the way. Others prefer to source their own products, either by collecting unique items from flea markets, making their own handcrafts or buying from wholesalers.

Whatever you decide to sell, it's better to choose a narrow niche, especially when starting out. Online shoppers can find DVDs or TVs any number of places, and a small seller probably won't be able to compete in terms of pricing. But if you sell something not many people offer, you'll have less price competition and more of a chance to stand out.

Good marketing can prevent you from fading into the background among thousands of other Google hits. Search engine optimization (SEO), the process of inserting key words into Web pages and item descriptions, is crucial for making sure your store pops up on Web searches. You can do it yourself by reading books on the topic, or hire an expert to help with your copy on a contract basis. You can also market yourself through pay-per-click advertising, which allows you to buy ads more affordably by using one of many ad sellers who only charge you when potential customers click on your links.

Reputation and appearances are key with Internet selling. To convince first-time customers that you're an actual merchant and not a site looking to scam their credit card information, make sure you have good Web design. It should look polished and legitimate, and paying a professional Web designer is probably worth it. You should also have SSL (Secure Sockets Layer) protection, a form of encryption that allows buyers to send personal and credit card information securely through the forms on your Web site.

Make sure your product pages are detailed and accurate, and that pictures look professional. Display shipping and return policies prominently on product pages, and include a separate page that tells customers about you and your business. These details can take a lot of work, and may end up costing money, but they will help shoppers feel like they're shopping at a legitimate Web site, encourage repeat business and increase sales in the long run.

Read on for more information on making money on the Web.

In 2006, Anshe Chung (the screen name of real-life Ailin Graef) became the first virtual millionaire to make a real world fortune from the online game Second Life. Making money in Second Life is possible because Linden dollars, the virtual currency used in the game, can be converted to real dollars. The game's developer, Linden Lab, lets users design and sell in-game merchandise and keep both the profits and the intellectual property

Chung made her fortune selling in-game land and custom designed buildings. Other users sell virtual clothes, pets and even in-game entertainment. And gross earnings for all Second Life players in 2009 topped $55 million. More than 21 percent of those earnings, or $12 million, were divided among the top 25 accounts [source: Linden Lab].