Campaign Reform on the State Level 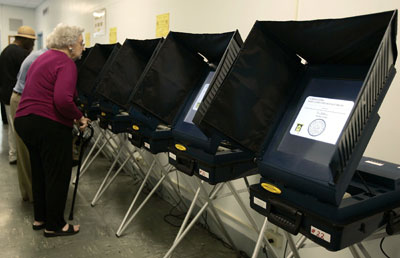 Voters take to the polls after months of campaigning by the candidates.
Chris Graythen/Getty Images

It's clear when looking at campaign finance reform that America's local communities are leading the charge. Throughout U.S. history, states have often been ahead of federal efforts, leading former Supreme Court Justice Louis Brandeis to label them "laboratories of reform" [source: Open Secrets]. California, New York and Massachusetts implemented disclosure laws well ahead of the federal government. In 1909, Colorado passed the nation's first public funding system, only to have it ruled unconstitutional just one year later. Americans would have to wait 60 years to see another public funding plan [source: Common Cause].

­Today, each state has control of its own campaign finance regulations, and some states have passed radical laws that govern their elections. Thirty states have made substantial changes to their campaign finance laws in the last 15 years. Maine has pushed for public financing for all elections. Washington state requires online spending disclosure. Many states have lobbied for shorter campaign periods, voluntary spending limits and contribution caps with great success. By making spending limits voluntary, states are able to avoid violating the terms of the Buckley v. Valeo ruling [source: Hoover Institution].

Some states limit contributions from individuals to PACs and from PACs to candidates. Unions and corporations are heavily monitored and limited in their influence, with Texas and Alaska prohibiting them from spending on a candidate's behalf altogether. Every state but Louisiana requires that campaign ads disclose who paid for them, and most mandate that ads paid for by organizations outside the campaign indicate that the candidate didn't authorize the ad. The same holds true for all radio and print advertising.

Vermont passed a controversial law called Act 64 in 1997 that put a mandatory cap on spending and contributions to candidates and PACs. However, this groundbreaking measure was met with opposition on the federal level and overturned by the Supreme Court in 2006 on the precedent of Buckley v. Valeo [source: Duke Law].

Colo­rado passed an aggressive piece of legislation in 2002 called Amendment 27. This finance reform initiative included caps on spending and contributions, as well as full disclosure of funds. Wealthy special interest groups were held in check by the measure, forcing candidates to work for a broad base of supporters instead of getting huge checks from a smaller pool. It also attempted to curb "attack ads" on the opposition by requiring candidates to personally stand behind their ads. Soon after, the opposition introduced legislation that would have rendered Amendment 27 useless, but grassroots efforts and a unified media campaign kept these provisions from being approved [source: Common Cause].

While states are generally bolder in their reform attempts, there are still many shortcomings. Many states do not have the money to support public funding of elections, and enforcement agencies are often understaffed and overworked. Candidates who cheat the system rarely draw penalty and are almost never criminally prosecuted.

Read on to find out how campaign finance works in the rest of the world.