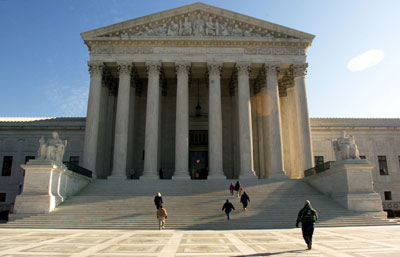 Campaign spending limits may be the most hotly contested issue of campaign finance. Proponents argue that excessive spending breeds corruption, hinders grassroots candidates and keeps wealthy special interest groups in the hip pocket of the candidate [source: Common Cause]. Opponents say that limiting spending is a violation of our First Amendment rights to free speech and that if a candidate can raise the money, he or she should be able to spend it. A cap on expenditure was initially made into legislation with FECA. However, the Supreme Court overturned the law in a landmark case just a few years later.

The high court ruled in the 1976 case of Buckey v. Valeo that:

"A restriction on the amount of money a person or group can spend on political communication during a campaign necessarily reduces the quantity of expression by restricting the number of issues discussed, the depth of their exploration, and the size of the audience reached. This is because virtually every means of communicating ideas in today's mass society requires the expenditure of money." [source: FEC]

The result of Buckley v. Valeo was that candidates have no cap on spending as long as the money is raised from private donors. Many state and local elections have voluntary spending limits and the result is usually a more level playing field for candidates. Politicians on the federal level are hesitant to back any provisions on spending limits because of the reality that more money usually ensures victory at the polls.

Disclosure is another important part of campaign finance legislation. In 1910, the Federal Corrupt Practices Act established disclosure requirements for House candidates. The following year, the act was expanded to include the Senate. It wasn't until FECA that the current system of disclosure was put in place [source: FEC]. Candidates are now strictly required to identify the names, occupations, employers and addresses of any individual who contributes more than $200 in an election cycle. They must also identify PACs that contribute to their campaign,­ and those PACs must disclose their financial information. While striking down the spending cap, Buckley v. Valeo upheld the strict regulations for disclosure.

­In the next section, we'll look more at campaign reform's past, present and future.

Have you ever noticed that lit­tle check box on your tax returns that allows you to give $3 toward the Presidential Election Campaign Fund? Maybe you've seen it, but you ignored it or had no idea what it meant. If you have, you aren't alone. Less than 15% of taxpayers contribute. So what exactly is it?

In 1976, the FEC introduced legislation that cleared the way for the public funding of federal elections. To qualify for public funding, candidates must meet certain eligibility requirements. For the primary election, the government matches funds up to $250 for each individual donor after the candidate has demonstrated broad public support by raising small amounts of money over a large area. Overall campaign expenditure and personal fund spending is limited.

For the general election, the party nominee is eligible for a public grant of $20 million if they limit spending to that amount and refuse private contributions. They're allowed to spend up to $50,000 of their own money without it counting against the spending limit [source: FEC].

With the huge sums of money being raised these days, it should come as no surprise that no major candidate in the 2008 presidential race is going with public funding. Doing so would create a large disparity in available funds and most likely a disadvantage at the polls.