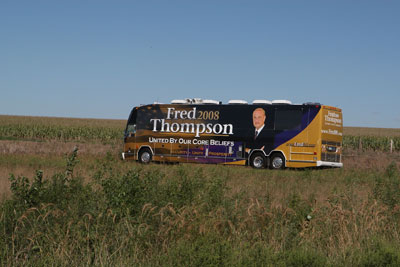 In the United States, fundraising plays a large role in getting a candidate elected to public office. Without large sums of money, a candidate has virtually no chance of achieving his goal. This doesn't mean that the person who raises and spends the most wins every time, but it's close. In the 2004 general elections, 95 percent of House races and 91 percent of Senate races were won by the candidate who spent the most on his campaign. It's also easier to stay in office than to get into office. Incumbents are generally able to raise more money than their opponents, which often results in elections with no financial opposition. In 2004, nearly one-third of the House races involved candidates with little or no opposition [source: Open Secrets].

With these statistics, it's no wonder that so much importance is put on raising money. It's become a necessary evil for politicians and leaves them in a somewhat of a quandary. With so much time being spent on fundraising, candidates can shortchange the people's interest they're hoping to represent.

Candidates raise money in a variety of ways. Billboards, lawn signs, direct mailings and leaflets are a good way to get the word out. TV advertising is easily the most expensive way to bring a candidate into the public's eye. Candidates can raise large sums of money in a single night by hosting a sit-down dinner for targeted, wealthy donors for a per-plate fee. Many of these donors hope to get a few words with the candidate to express an interest they hope can be fulfilled. Some of them simply like being seen at premier social events.

The public media is another useful tool for the aspiring politician. Candidates often use newspapers and TV news to garner free advertising. Staffers organize protests and rallies, volunteers cold call, and candidates go on whistle stop tours to spread the word that they care about the common man in the small town. Another technique is to ride the coattails of a popular politician by gaining his endorsement. Former president Bill Clinton has proven to be a huge asset to his wife Hillary's bid for the 2008 White House.

All of these events and advertising methods cost some serious money. Campaigns spend funds just about as fast as they're raised. Aside from the material items like posters, pins, leaflets, billboards and TV airtime, the money is largely spent on funding the fundraising. Plane tickets, hotel rooms, campaign headquarters overhead, staff, event catering, event space and entertainment are just a handful of costs incurred on the campaign trail.

In the next section, we'll examine the regulations for contribution as well as some of the loopholes that allow campaigner­s to dodge them.

Politicians these days are using technology to raise money like never before. Microtargeting is one of the latest methods candidates use to find likely donors.

Microtarge­ting is based on a technique called data mining -- sifting through massive amounts of personal data and extracting what's useful. In the case of fundraising, campaigns hire data-mining specialists to get specific information on potential voters and donors. Those people are then microtargeted with personal messages, specific to that person's needs. An unemployed dock worker may receive a message about a candidate that supports his industry. A soccer mom may hear about education or homeland security [source: Washington Post].