Browse the article How to Avoid Professional Misconduct 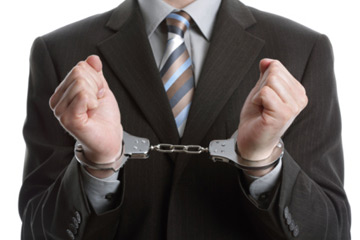 You could end up facing dire consequences if you take part in professional misconduct.
©iStockphoto/Thinkstock

When you work with a professional, you expect a level of competence. Unfortunately, sometimes the worst-case scenario happens. You have an operation, only to find out that the surgeon operated on you under the influence and worked on the wrong part of your body. A lawyer breaches the code of confidentiality, causing you to lose your case. A teacher physically abuses your child in the classroom. An engineer puts his stamp of approval on the plans for your new home, even though he knows it's structurally unsound. Many of these horrific situations can be avoided if the professional in question abides by his or her industry's rules of professional conduct.

Codes of professional conduct are typically found in licensed occupations. Many states license hundreds of occupations in order to protect the public. These positions include medical professionals, lawyers, veterinarian, engineers, architects, teachers, real estate brokers, certified public accountants and barbers. To be licensed, a person has to register with the state he or she practices in and meet the state standards for that profession.

These codes of conduct are rooted in ethics. The philosophy of ethics deals with broad values around actions, namely looking at a person's motive and the end result of that person's action and applying standards of right and wrong. A code of professional conduct spells out rules for professionals to abide by in order to uphold the standards and respect given to the occupation.

Although professional misconduct codes are specific to regulated professions, many companies who don't employ licensed workers often have codes of conduct or ethics that they require their workers to abide by.

Now that you know a little bit more about professional misconduct, let's take a deeper look at some of the typical items in a professional code of conduct. 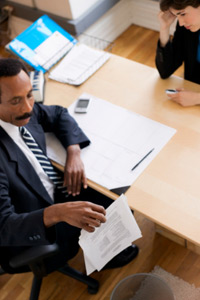 Talk to your human resources representative to learn more about your employer's rules of conduct.
Creatas Images/Thinkstock

As we mentioned on the last page, regulated professions have codes of conduct to protect the public's overall well-being from unscrupulous people. Codes of conduct can also bolster a profession's image in the eyes of the public. When a certain occupation adheres to strict quality standards, it establishes a level of trust between the professional and the client.

Each company with a code of conduct has a specific set of rules that relate to the job in question. However, most codes have general, overarching rules that are rather similar, and any professional would do well to abide by these general guidelines.

Most people also have to take licensing exams to prove that they understand all aspects of their job. However, earning a license doesn't necessarily mean a person is free to practice. State licensing guidelines often require that a professional renew her license on a regular basis. The guidelines for renewal vary by state and occupation, but they frequently require continuing education to keep the person up-to-date with industry changes.

Confidentiality is another standard stipulation in professional codes, particularly in the medical and legal professions. Confidentiality guidelines are included in codes of conduct to allow a patient or client to freely disclose information without the fear of recrimination.

Other aspects of professional codes include stipulations about substance abuse and discrimination by race, gender or culture. Many codes also acknowledge the possibility that someone might have a criminal past. Although some places do allow prior criminals to practice a given profession, they must maintain high moral codes in order to do so.

Now that we've talked about what's in a professional code of conduct, let's learn how to follow it. 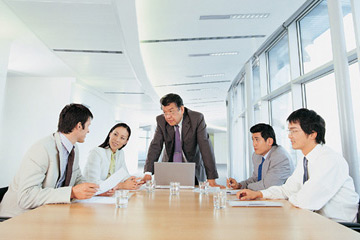 Things can get awkward if you don't stick to the rules.
Digital Vision/Thinkstock

Because the guidelines for professional licensing vary by state, the best place to look for information about proper professional conduct is the state in which you'll practice. The office or agency responsible for licensing will have the details about conduct standards for each occupation.

Professional associations are also another valuable resource for licensed professionals. Associations are concerned with the livelihood of the job and have a strong interest in maintaining its integrity. Therefore, these organizations will have a lot of information about ethics and guidelines that their members can tap into. For occupations that require continuing education, a professional association can be a resource for identifying classes that fulfill these requirements.

Even though most people act in accordance with an industry's guidelines, some still have to deal with allegations of misconduct. If someone is found guilty of deliberately breaching conduct standards, a number of situations could happen.

When a misconduct charge is filed, the professional usually undergoes an investigation, followed by a hearing. The investigation determines whether enough evidence exists to warrant a hearing. A committee rules on the incident and maintains a record of complaints. While some investigations are dismissed due to lack of supporting evidence, other cases result in action taken against the person.

These actions vary in their severity and may escalate depending on the situation:

When a professional receives an admonishment, he or she receives a warning about behavior and may have to attend conduct classes. If the situation is more severe or is a repeat offense, suspension from practicing for a certain period of time may follow. More serious cases may result in the professional completely losing her license. Finally, the most egregious cases of professional misconduct may get the practitioner banned from ever practicing again. This ensures that someone doesn't leave one state and attempt to seek licensure in another.

While professional codes of conduct may seem strict, they're in place to protect the public and ensure its safety. For lots more information on conduct in the workplace, see the links on the next page.