Would you pay $55 for bottled water? 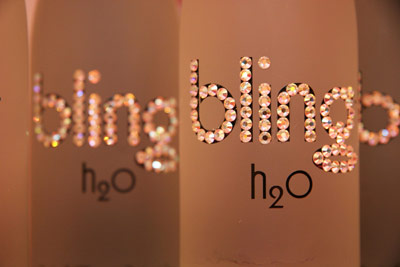 Bling H20 -- the new (expensive) bottled water. But too many of these could lead to trouble. See world food records pictures.
Photo courtesy Marsaili McGrath/Getty Images

What's the most you would pay for a bottle of water? Two dollars? Maybe $4 at a concert? How about $55?

Believe it or not, there is such a thing as a bottle of water that costs $55. Kevin Boyd, a writer and producer from Hollywood, has developed a "luxury" bottled water called Bling H2O that costs an average of $55. Depending on the size, prices can range anywhere from $25 to as much as $75. What's so special about Bling H2O that makes it so expensive? Is the water treated differently than the bottled water you buy at the gas station? Does it at least come with vitamins?

Unfortunately, you won't find any vitamins in Bling H2O. The water inside, however, does receive more treatment than what's inside an average $2 plastic bottle. According to Bling H2O's Web site, the water is bottled from natural springs in Dandridge, Tenn. The company claims to use a "nine step purification process that includes ozone, ultraviolet and microfiltration." This sounds nice, but still -- does that really make it worth $55?

Take one look at the bottle itself -- it can answer any of your questions about cost. True to its trendy name, a bottle of Bling H2O is much more than a plastic container to hold mere water. The bottles are available in limited-edition frosted glasses and covered with Swarovski crystals. Even Bling H2O's Web site admits that the product is as much about image as it is taste. The company originally handed out the water only to actors and athletes -- celebrities such as Jamie Foxx and Ben Stiller have been spotted showing off shiny bottles, and Paris Hilton allegedly feeds the water to her dog. Now, the water is available to the public and showing up in fancy New York restaurants. The makers of Bling H2O also market the bottle as reusable and refillable -- you can flaunt it around town and show how trendy and environmentally friendly you are.

Even wi­thout the cost that comes from the decorative bottle and its associated brand, Bling H20 would still be expensive. Next, we'll look at the costs behind bottled water. ­ 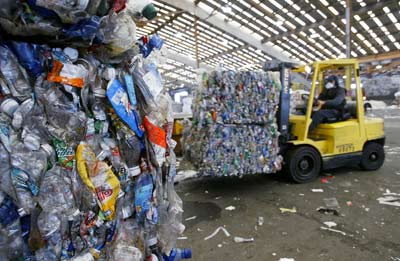 Critics point out the resources and waste that are byproducts of bottled water.
Photo courtesy Justin Sullivan/Getty Images

If you got rid of the fancy Bling H2O bottle and lowered the price, would it still be worth it? What about the "regular" plastic bottles of water you find in the store? Are they even worth $2?

Bottled water has become so popular that 41 billion gallons are consumed every year around the world. Many people consider it safe and convenient. Over the past few years, however, many bottled water companies labeling their product as "purified" or "natural spring water" have confessed to filling their products with simple tap water. In July 2007, for instance, Pepsi admitted to filling bottles of Aquafina with public water, even though the packaging suggests the water comes from natural springs [source: Environmental Working Group]. Recent studies have concluded that bottled water is no safer than tap water, and the costs of producing the drink and its effect on the environment have caused some alarm [source: National Geographic News].

To understand how expensive regular bottled water is, let's compare it with gasoline. With the price of oil rising, we typically think of gasoline as very expensive. On the other hand, some of us will barely blink an eye at picking up a few bottles of water from the same gas station. Here are the numbers:

A gallon of gas costs around $3. If we assume a one-liter bottle of water from the store costs about $2.50, a gallon of the same bottled water should cost about $10. Water, life's most necessary substance, costs about three times more than gasoline when it comes in a plastic bottle. If you wanted to fill up a car's 15-gallon tank with gasoline, it would cost you about $45. If you wanted to fill up that same 15-gallon tank with bottled water, it would cost you $150 [source: National Geographic News].

Tap water, on the other hand, costs a fraction of the price of bottled water. The same $2 you spend on a liter of bottled water will get you about 1,000 gallons of tap water [source: EPA].

So, even though it's cheaper than Bling H20, bottled water is still expensive. Next, we'll take a look at some of the other products on the market that seem to cost more than they're worth. 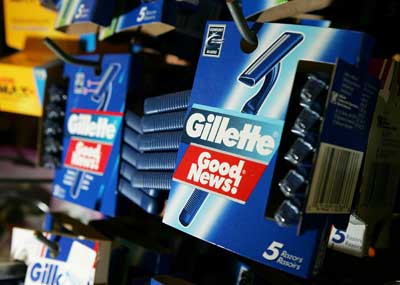 Disposable razors work for a few days, but after that, you throw them away.
Justin Sullivan/Getty Images

Bling H2O isn't the only product that charges high prices for otherwise inexpensive products. Here are some other overpriced items:

Diamonds - Most people suggest setting aside two to three months of your salary in order to pay for a diamond engagement ring. And De Beers, the world's leading diamond company, goes out of its way to tell you that a diamond is a rare thing. Diamonds are made from carbon, however, one of the most abundant elements on the planet. As a monopoly, De Beers doesn't just control the supply of diamonds -- they also create demand. Their advertising campaigns have solidified the image of diamonds and marriage in the public's mind. People rarely sell diamonds back because they see them as family heirlooms. On average, a high-quality engagement ring can cost $3,000 to $4,000.

Razors - Unless you regularly go to a barber shop to get a shave, you probably use a typical, name-brand safety razor, the kind you buy in the hygiene section at the grocery store. The razor's handle isn't the expensive part -- it's the endless number of disposable razor heads that end up costing lots of money. They generally cost as much (or more) than the handle itself, and they don't last very long before becoming dull.

Wine - Buying wine at a restaurant and buying wine from a store can be two completely different experiences. If you're eating out at a nice restaurant and want a bottle of wine, you might think about holding back until after the meal. Restaurants are notorious for setting their wine prices very high -- as much as three to four times the retail price.

Movie theater concessions - If you think the price of movie tickets is bad, take a look at how much popcorn, candy and a soda will cost you. Since most of the profit from ticket sales goes back to the studios, the theaters need some way to make money and stay in business. The popcorn that costs $4 at the concession stand only costs the theater owners about 40 cents [source: Ars Technica]. And of course, the $3 candy behind the flashy glass counter top is about 75 cents in a grocery store or gas station. Without these high markups, though, we wouldn't be able to enjoy movies on the big screen -- theaters wouldn't be able to afford it. If we want to crawl away from our high-definition TV sets and get out the house, the higher snack prices will have to stay for now.

People have been paying high markups on items like these for years. Sometimes, consumers don't even realize that what they're paying is far more than the purchase is worth. The $55 bottle of water isn't likely to fall into this category anytime soon, though.

To learn more about bottled water and related topics, see the links on the next page.

If a Robot Takes a Job From a Human, Should It Pay Taxes, Too?
Does a smartphone raise your risk of identity theft?
What would a moneyless world look like?