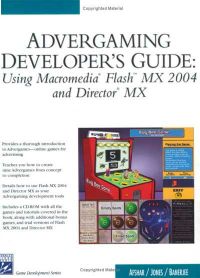 One of several books to help developers create advergames.
Photo courtesy of Amazon.com

­ While advergames can be hugely successful, they sometimes come at a high cost. Large game developers may charge as much as $500,000 for a game. Many smaller developers, however, may charge in the neighborhood of $10,000 to $100,000, depending on the level of customization and whether or not the game is based on an existing game.

Games developed at the lower end of the cost spectrum may be traditional games that are simply customized with a client’'s product or message. For example, a game like Frogger might have chickens crossing the highway rather than frogs to promote a chicken brand. Or games similar to Tetris might have colored candies falling rather than the traditional block shapes.

Development time also varies greatly based on both the complexity and customization level of the game. A completely customized game that requires a unique and complex storyline can take 12 to 18 months to develop, while the simpler advergames can be completed in only a few months, depending on the developer.

One of the keys to developing an effective advergame is to select developers based on their experience within the product area as well as the type of game environment that needs to be created. In fact, having both a team of game developers and a team of advertisers working on the advergame can help ensure that you end up with a game that is not only compelling and entertaining to play but also very effectively incorporates your product and advertising message -- and that these two elements are appropriately reaching the target market for your product.

Selecting game developers that have no advertising experience might result in a game that is highly entertaining but doesn’'t get the advertising message across (and doesn'’t result in a significant increase in sales). By the same token, having your game developed by an ad firm with little gaming experience, can result in a game that is too heavily focused on the product and, as a result, isn't as entertaining and will ultimately not be as successful -- particularly with viral marketing.

Once you have selected the development team and they’'ve completed the game, distribution can be a minimal cost in the online world. Adding the game to your existing Web site will not only help increase traffic to your site and encourage longer visits, it also provides a very low-cost vehicle for distribution. Increases in bandwidth charges, and potential back-end upgrades for your Web site may be your only expenses.

If the game will be distributed via CD or DVD, as in a cereal box promotion, your distribution costs will be higher.

On the next page, see where advergaming could be going in the future.