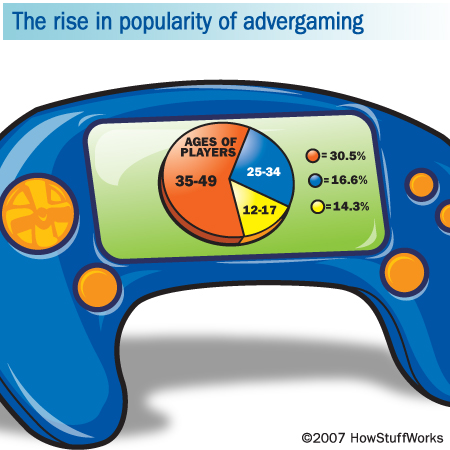 Many marketers have been hard pressed to find a way to promote their products to younger target markets. Technology-savvy teenagers have Tivo to skip past commercials and faster mouse hands to close those ad-flaunting pop-up windows. Banner ads, which have rarely produced the impact advertisers need, are often ignored. When advergaming entered the arena, it offered a way to get to those hard-to-reach younger markets by entering their worlds through the games they play. Gaming was one of the last frontiers in advertising spaces. When asked, many gamers say they don'’t mind the ads, particularly product placement within a game, because it adds realism. You would expect to see a Pepsi logo rather than some generic product name (or nothing at all).

So advergaming might work if you market your products to video game-playing teenagers, but what about products that don'’t target that demographic? Well, that'’s where the surprising (to some) market research comes in. According to New York-based Nielsen//NetRatings, it’s not just a bunch of teenagers that are playing the video games these days. Its research shows that 30.5 percent of the online games audience is between 35 and 49 years of age, compared with 16.6 percent between 25 and 34, and 14.3 percent between 12 and 17, according to February 2004 measurements.

And, more women are participating than you might think -- many of them professionals. Numbers, also from Nielsen//NetRatings, show that 41 percent of players at online game sites like GameSpot, Candystand, and Pogo are women.

Reston, VA-based ScoreNetworks, a firm that measures online game use, confirms similar findings adding that online game players are falling in line with the general population. On average, 8.9 percent of players at the Top 10 gaming sites are African American, 4.2 percent are Asian and 79.3 percent are white. Also of importance to marketers, they'’ve found that about 35 percent of players on those sites earn $50,000 to $100,000 annually, while 16.2 percent earn more than $100,000. Being able to target those with higher levels of discretionary income (i.e., money left over from disposable income that is often used for "luxuries") enables marketers to sell more higher dollar items such as cars and electronics.