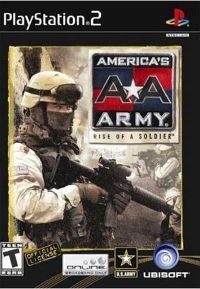 America's Army is a game to advertise the United States Army to increase recruitment, made specifically for PlayStation 2.
Photo courtesy of Amazon.com

There are three general groupings for advergames. First, games may be placed on a company Web site (or even a special gaming site owned or sponsored by the company) in order to attract Web visitors and entice them to remain on the site longer. The longer a visitor is on the site, the longer the company’'s message is in front of them. The games may or may not be related to the product.

­The second type is closer to the traditional, commercial video game developed and sold to be played on computers or game consoles, but the primary difference is that the games are developed with a specific purpose in mind. For example, the United States Army sponsored an extremely successful game called "America's Army" in an effort to increase recruitment.

The third grouping of advergame is what we typically call product placement, or in-game advertising, where the product or an ad for the product is part of the game. For example, you might see a Ford Mustang cruising the game's virtual streets.

So, the games can be completely free and played online, or you might find ads as part of a commercial game that you've bought to play on a game console or computer. More specific methods for advergaming include:

Signage Within an Existing Game

This is more passive advertising that places product ads within the game scene. You might see billboards, ads on buses, or a drink machine with brands of soda emblazoned on its side. The Red Bull energy drink Web site has a game called Red Bull Flugtag Baltimore, which is an airspeed game that has the player launch a small airplane down a runway over the Baltimore harbor to see how far they can make it fly. Flapping Red Bull banners line the runway.

A young girl is intent on her computer game. Advergaming is often used in games targeted to children.
Photo courtesy of Dreamstime ©2000-2007. All Rights Reserved.

Integrating the Product into the Game Itself

With this type of game you will interact with the product (or something that represents it) as part of the game. At Postopia.com, for example, Factory Frenzy takes you through the Honeycomb factory where you gather pieces of Honeycomb cereal, Mario fashion, by bonking your head against boxes of Post Honeycombs. Other games on the site have you gobbling up spoonfuls of cereal as you ride a bobsled or answering trivia questions about the Flintstones while boxes of Fruity Pebbles are displayed on the screen.

In this scenario, you might see ads for a product when the game loads or when you go to a new level.

Ads Around the Game Screen

Like the transitional ads, the product and its message aren'’t part of the game itself. In this case, the ad might be part of the scoreboard, or even part of the playing field (if there is one). Or, ads may just sit around the screen. At makaimedia.com, for example, a banner ad sits at the top of the screen just above the game. At MSN games, you can play Bunco, sponsored by Prilosec OTC. While you're playing, the Prilosec logo is both at the top of the screen and faded on the playing surface where the dice are rolled. Honda Racing sponsors games on its UK website. The games are very simple in design and function, having only a Honda Racing banner across the top.

With broadband Internet access becoming more widespread, dynamic advertising within games has become much more practical. Internet connectivity makes it possible to display in-game advertisements in real time, allowing content to be updated. Billboard ads can change, video commercials can be displayed on the outside of building in a virtual city, and even interactive game kiosks can be incorporated within another game.

Another company, Adscape Media, also offers dynamic advertising in the form of ads on billboards or vending machines that appear in videogames. Adscape offers a product called AdverPlay™ that gives advertisers the ability to remotely and dynamically activate and deactivate each paid ad spot within the game—, even after it’'s distributed. This eliminates the need to update a game in order to change ad spot placement.