Air Force One and Marine One 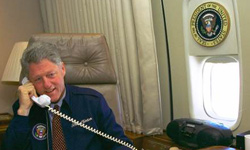 You'd only recognize that this presidential office was on an airplane by the shape of the window.
AP Photo/Doug Mills

When presidents travel, they do it in style. Although any plane carrying the president is referred to as "Air Force One," most people use the name to refer to the two Boeing 747-200B jets built specifically for the president.

The middle level of these planes carries up to 70 passengers, as well as a 26-person crew. There's ample room in the staff, media and security areas in the back half of the plane, but the president has a personal suite under the cockpit with an office, bathroom, bedroom and workout room. The upper level of the plane is for the telecommunications center, while the bottom level is for cargo. C141 Starlifter cargo planes carry the motorcade -- including armored limos -- to wherever the president is headed.

The Air Force One perk is so cool that it's even inspired an action movie of the same name. Though many people consider Air Force One the ultimate presidential luxury, it's tough to determine the cost of such a convenience.

When traveling short distances, such as to Camp David or even to Andrews Air Force Base, the president uses a helicopter -- Marine One. The president's helicopter fleet currently includes Sikorsky VH-3D Sea Kings and VH-60N Black Hawks. Plans for new Marine One helicopters caused controversy when the Pentagon announced in 2008 that they'd cost $400 million each [source: Baker].