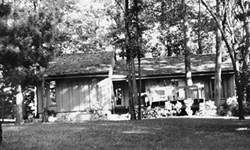 Camp David is a secure recreational home for the president.
AP Photo/Brendan Byrne

Despite the conveniences and luxuries of the White House, it's still as much an office as it is a home. When presidents need more relaxation, they visit secluded Camp David. In 1942, President Franklin D. Roosevelt was looking for a presidential home-away-from-home, so he built one for about $25,000 [source: Kruse]. Camp David sits atop Catoctin Mountain outside Thurmont, Md. It's a convenient 70 miles (113 kilometers) from Washington, D.C., which makes for a quick getaway should the president need a break from the bustling city. And in the summertime, Camp David is also much cooler than the district.

FDR used the retreat home frequently before his death and originally named it Shangri La -- a reference to the Tibetan utopia in the novel "Lost Horizon." Eisenhower later renovated it and renamed it Camp David in honor of his grandson. Most notably, President Carter used it as a site for the peace talks between the Egyptian president and Israeli prime minister in 1978.

Today, Camp David is closed to the public and extremely secure. After several renovations, the site now features 11 residence cabins and an office cabin, a swimming pool, skeet-shooting range and bowling alley. Presidents travel there via helicopter, which leads us to our next perk.