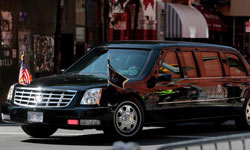 Since the late '30s, the U.S. government has commissioned vehicles for presidential use, and those vehicles require advanced communications equipment, convenience features, armor plating and defense countermeasures. American cars are traditionally chosen for the role; the current limousine style used is worth about $300,000, and is also called Cadillac One, or "The Beast."

While a lot of the security features are classified, we know the armor on Cadillac One is at least 5 inches (12.7 centimeters) thick, the doors weigh as much as a Boeing 757 door, and the tires function even when punctured. The car has its own oxygen supply and firefighting system in the trunk -- as well as a blood bank of the president's type. Outside, there is infrared video for driving in bad conditions, and the seven-seater can also shoot tear-gas and smoke grenades if necessary.

Finally, a fleet of two black armored busses intended for dignitaries as well as the president are referred to as Ground Force One, and cost a little more than $1 million each.