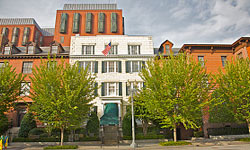 Blair House is the official state guest house for the President of the United States. A complex of four connected townhouses -- including the original House, built in 1824 and acquired by the U.S. in 1942 -- Blair House is actually larger than the White House, at more than 70,000 square feet (21,336 square meters). Its 119 rooms include more than 20 bedrooms for guests and staff, 35 bathrooms, four dining rooms, a gym, a flower shop and a hair salon.

Several presidents-elect and their families have spent their last few nights before inauguration in Blair House. Even more interestingly, when foreign leaders stay at Blair House, the house flies their flag -- which means that the house itself becomes foreign soil.

No wonder it's managed by the Office of the Chief of Protocol, which operates out of the State department and also handles things like consulates, ambassadors and state arrival ceremonies. The chief of protocol works together with the social secretary, executive chefs, and chief usher to deal with everything from visit details to formal and informal dinners, transportation, customs and etiquette, and anything else to help ensure a smooth and mutually beneficial visit.