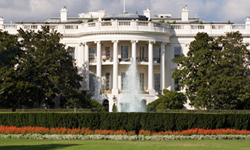 The White House is just one among many of the pricey perks available to the U.S. president. See more pictures of Washington, D.C..
©iStockphoto.com/bluestocking

Ever since it won independence, the United States has cherished democracy and spurned the semblance of aristocracy and monarchy. However, the need for a central executive leader -- the president -- has made it difficult to avoid giving that person preferential treatment. After all, it's a big job. Should presidents have to waste time doing their own laundry and buying plane tickets when they're signing legislation and dispatching troops?

As time's gone on, the perks of the job have become more numerous. Some of these perks have sparked controversy, such as free campaign resources at the president's disposal. But in general, the American people seem to accept this special treatment. It helps that presidents only get to be spoiled for eight years at most -- they aren't royalty from the cradle to the grave (though we will talk about post-presidential perks later). The VIP treatment also seems fitting considering the difficult road to the White House. Presidential candidates spend years and millions upon millions of dollars campaigning. Once they win, these perks eliminate the hassles and distractions from their all-important job.

But perks aren't just about making the president's life easier; instead, many are for security or just practical reasons. And having one of the highest-pressure jobs in the world probably dulls the joys of such perks. Still, it's nice to imagine what life would be like with all these extras.