by Marie Willsey
Prev NEXT
3 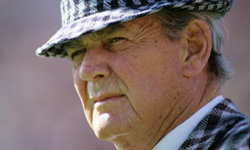 In one case, the Saturday Evening Post, published by Curtis Publishing Company, ran an article accusing Wally Butts, then-athletic director for the University of Georgia, of conspiring to fix a 1962 football game between Georgia and its rival, the University of Alabama. The article claimed that Butts gave Georgia's plays to Alabama coach Paul "Bear" Bryant. Butts sued for defamation, and a trial court ruled in his favor. Soon after the court's ruling in Times vs. Sullivan, Curtis moved for a new trial because the actual malice standard from that case wasn't applied. But Curtis wasn't an elected public official - did the standard apply?

In its 5-4 ruling, the Supreme Court agreed to extend the reach of the Sullivan verdict to include public figures like national politicians, business tycoons and celebrities. Chief Justice Earl Warren reasoned there was "no basis in law, logic, or First Amendment policy" to differentiate between public officials and public figures [source: Freedom Forum].