by Marie Willsey
Prev NEXT
5 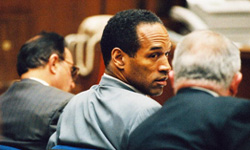 Ever wonder why judges allow cameras in courtrooms?

A Miami Beach jury convicted two men of conspiracy to commit burglary, grand larceny and possession of burglary tools after breaking into a popular local restaurant. Normally, a case like this wouldn't attract much public attention and media scrutiny, but the men in this case just happened to be Miami Beach police officers. The officers objected to the media presence, claiming the attention would make a fair trial impossible. However, the trial court had already agreed to allow cameras in the courtroom on an experimental basis, and the officers were convicted; after debating whether the cameras denied the defendants a fair trial under the 6th and 14th Amendments, the U.S. Supreme Court upheld the trial court's position.

Since that time, most federal and state courts allow cameras in the courtroom. This case helped clear the way for live courtroom TV shows, as well as the famous live coverage of the O.J Simpson and Rodney King trials. The question of cameras in the courtroom continues to a be a complicated one, as some people believe it an invasion of privacy of those involved in the case, and that excessive media coverage may distort judicial proceedings.