by Cristen Conger
Prev NEXT
2 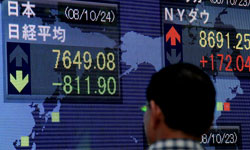 Japan has the second-highest gross debt in the world.
Koichi Kamoshida/Getty Images

Public debt as percentage of GDP: 197

First, a housing market crash in the '90s took a bite out of the Japanese economy. Then, there were the earthquake and tsunami natural disasters, followed by the Fukushima nuclear power plant explosion in March 2011. The World Bank estimated recovery costs from the triple punch reaching up to $235 billion [source: Economist]. Long story short, these aren't exactly the salad days for the island nation.

Although Japan and the United States are both trillions in the hole, their debt scenarios are entirely different. First, the American debt load represents roughly 62 percent of its GDP, less than a third of Japan's debt ratio. And unlike the U.S. economy that has borrowed heavily from foreign investors, with an $850 billion IOU to Japan alone, the eastern ally has borrowed a boatload of money from itself [source: Dumaine and Rapp]. The Japanese government carries an enormous public debt, whereas its household debt and external debt loads are far more stable [source: Economist].