by Cristen Conger
Prev NEXT
5 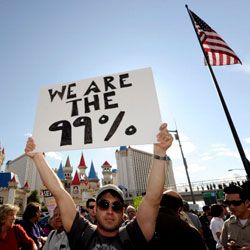 Public debt as percentage of GDP: 62

Don't let the numbers fool you. The United States doesn't rank in the top 10 countries with the largest public debt as a percentage of GDP, but that doesn't mean it's in the clear by any means. The United States owns the largest amount gross external debt (public and private debt combined) in the world. The nation's whopping $14 trillion -- and growing -- tab has eaten away at the GDP income at an escalating rate in recent years. And though the U.S. Congress barely dodged defaulting on its loan repayments in August 2011, the Standard & Poor's credit-rating agency nevertheless downgraded its credit from the coveted AAA status to the notch below, AA+[source: Goldfarb]. On a more positive note, household debt in the United States inched downward in 2011 [source: Lahart and Light]. The change wasn't dramatic, but when the economic climate is so grim, it seems like every little bit counts.