by Cristen Conger
Prev NEXT
6 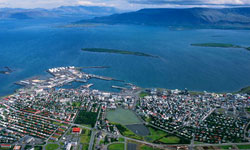 Iceland was the first thriving nation to request a financial bailout from the International Monetary Fund.
Ilan Arad/Getty Images

Public debt as percentage of GDP: 126

Although this Nordic country is far from being out of the red, the credit-rating agency Fitch upgraded its economic forecast from grim to stable in the spring of 2011 [source: Iceland Review]. That might seem like a negligible shift, but considering how far Iceland has come since the global recession threatened to sink its economy (40 percent of Iceland's exports are related to its fishing industry), the upgrade is actually pretty significant.

The first thriving nation to request a financial bailout from the International Monetary Fund in 2008, Iceland received billions in loans after three of its major banks collapsed [source: Chakrabortty]. In a dramatic twist, the Icelandic people voted against repaying a $5 billion loan from the British and Dutch governments -- not once, but twice. Rather than saddling Iceland's recovery economy with more public debt, which is the typical approach, the pressure is now on the crippled bank Landsbanki to pay the piper [source: The Telegraph]. And if the Fitch upgrade is any indicator, turning economic convention on its head like that may have been the wisest way to go.