by Cristen Conger
Prev NEXT
9 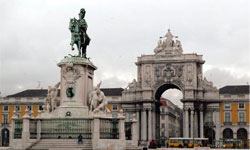 Portugal has struggled since the start of the recession.
Andreas Rentz/Getty Images

Public debt as percentage of GDP: 93

Portugal comprises the "P" in the PIGS acronym, which economists batted around when the global recession began taking its toll on the EU in 2009. Portugal, Ireland, Greece and Spain were lumped together derisively as the cluster of nations with the largest and most malignant debt obligations [source: BBC]. An EU member since 1986, Portugal has lagged behind other member nations' GDP performance in recent years and likewise attracted criticism for its mounting public debt. Unable to save itself, Portugal received a $110 billion bailout package from the EU in May 2011. Of course, bailout cash doesn't come for free. In exchange for the rescue effort, Portugal instituted deeper pay cuts and hiring freezes for the civil sector, stalling infrastructure improvements to its airport and high-speed rail line as well [source: Tremlett]. Economists' fingers remain tightly crossed that Portugal doesn't need a second handout anytime soon, which could have a violent ripple effect far beyond its borders.