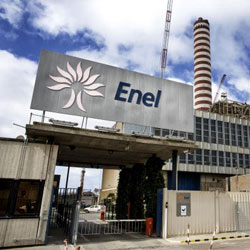 Enel, one of Europe's leading energy providers, exchanged 31.7 percent of itself for more than $16.5 billion during its 1999 IPO.
Marco Di Lauro/Getty Images

You may not have heard of Italian energy company Enel SpA, but you may have gotten power from them at some point. The company has a presence in 23 countries in Europe, North and South America and Asia. It's the second largest energy company in Europe and it has a customer base of 60.5 million -- about the population of the entire United Kingdom [sources: Enel SpA, BBC]. The company is also well-known as a pioneer in green energy, with investments in hydroelectric, geothermal, solar, wind and biomass power generation.

It seems that none of this was lost on investors when Enel SpA went public on Nov. 2, 1999. The formerly state-owned company was privatized just ahead of Italy's move to adopt the euro as its currency. Its IPO of 31.7 percent of the publicly traded company (3.8 billion shares) raised $16.58 billion in capital for the firm, representing 10 percent of the value of the Milan-30 blue chip business index [source: BusinessWeek].