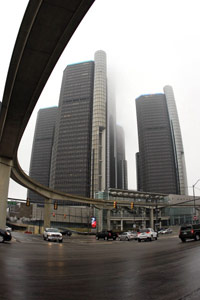 The General Motors headquarters building in Detroit. The giant automakers announced the largest profits in its history -- some $7.5 billion -- in February 2012.
Bill Pugliano/Getty Images

When do the taxpayers benefit from an IPO? When a company that owes its life to a federal bailout goes public in a big way.

In December 2008, President George W. Bush threw a $50 billion lifeline to General Motors, which had been struggling (along with other American automakers) in the wake of the global economic downturn that started in 2007. Unfortunately, that assistance didn't do much to keep GM from filing for Chapter 11 bankruptcy in June 2009. As part of the company restructuring that usually follows a Chapter 11 filing, the U.S. Treasury Department agreed to loan the company another $30 billion -- in exchange for a 60-percent stake in the company once it got back on its feet [source: ProPublica]. By the following month, the newly reformed GM was ready to start operations once more.

By the following year, GM was one of the hottest companies on the planet. Investors couldn't wait to buy their way in -- and the company knew it: Less than a week before its November 2010 IPO, the company's shareholders raised the estimated share price from between $26 and $29 per share to between $32 and $33 a share [source: Isidore]. When GM finally went public on Nov. 19, 2010, the automaker raised a staggering $15.8 billion, making it the second-largest IPO in U.S. history. That cash infusion helped GM repay nearly half of its initial $50 billion bailout, which resulted in nearly $700 billion in federal revenue [source: ProPublica]. That should make the taxpayers very, very happy.