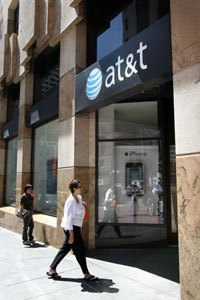 AT&T Wireless, the mobile division of American telecommunications monolith AT&T, just barely squeaked in its IPO before the dot-com bubble burst. The stock market began to slide in mid-March 2000, and AT&T Wireless released its initial public offering on April 26. Other tech companies withdrew their IPOs, but AT&T gambled and went ahead with its offering. It paid off.

The wireless division's affiliation with its well-known parent certainly didn't hurt its prospects. When trading began on the NYSE, AT&T Wireless released 360 million shares. Investors fell in step with underwriters' valuation of the stock, with shares opening at $30.12 and closing at $31.75; its pre-offer value was $29.50 [source: Portnoy and Jastrow].

By the time the bell rung to close the day on the exchange, AT&T Wireless had raked in $10.62 billion in new capital [source: BusinessWeek]. It set the record for the largest IPO in American history, a title the company would hold for six years.