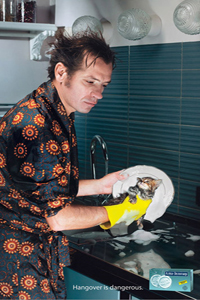 Sometimes Westerners don't catch awesome ad campaigns because they're run in very far off places, like Ukraine, for example. Such is the case with Alka-Seltzer's "Hangover is Dangerous" campaign.

The print ad campaign from 2008 ran in Ukraine's magazines and print media around the holiday season and featured images like the one above -- of a clearly hungover man, ostensibly on the morning after really tying one on, washing his dishes with his kitten instead of a sponge. Another ad shows a man using his Christmas tree as the toilet and still another one shows a man groggily answering a hot iron, instead of his phone.