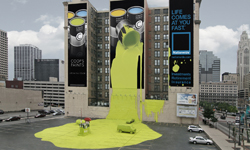 Nationwide Insurance's long-running "Life Comes at You Fast" campaign has covered television, print media, radio and the Internet. But the company pulled out all the stops for a May 2007 local billboard campaign in Columbus, Ohio, where the company's international headquarters are located.

The company contracted with Texas agency TM Advertising to create what amounts to a street art installation. The company took over three billboards mounted on the side of the Atlas Building in downtown Columbus, two for a fake company called "Coop's Paints" and one for its logo and "Life Comes at You Fast" tagline. The middle "Coop's Paints" billboard spills yellow paint out of the imaginary world of advertising and into reality, covering the bottom of the building, the parking lot below, cars and the parking attendant's shelter. The message comes through loud and clear.